At first blush Cynthia Girard’s work is a candy-coated world of animals, birds, and simple political slogans: cute but not threatening. But do not be fooled: Girard uses colour, pattern, and the reassuring forms of small beasts to disarm. On closer look this work deals in class struggle, social utopias, and the game of politics and power. Her paintings and sculptures borrow from the lineage of Political Theatre: theatre by, of, and for the people. Girard picks freely from Western history to select costumes and props, bringing together a commanding cast of unlikely characters, settings, and struggles with an absurdist hand and a comic voice, creating something that sparkles like a fairy tale, but delivers the somber punch of social satire.

A compelling list of social flare-ups that have been activated in resistance to conservative or right-wing politics and economics are a constant in Girard’s work. This is the action of her paintings: the political rallies, street protests, and student marches to demand better for women, queers, and students. The voices of civil rights, of Québec liberation, for ending nukes, embracing peace, and saving the earth. What all these campaigns share is a heavy reliance on grass-roots processions, demonstrations, and banners to convey their messages. Girard’s “painterly constructions”, as she calls them, are radically removed from the walls, hung on makeshift scaffolding, referencing the temporary scenic backdrops of street theatre and political banners – emblazoned with messages that are at once silly, powerful, and hopeful.

For Girard an exhibition or installation is a temporary platform to voice opinions and ask questions, and for real dialogue to happen, others should be involved. For this iteration, Girard has invited five artists – David Altmejd, Julie Doucet, Groupe d’action en cinéma Épopée, Henry Kleine, and Noémi McComber – to “nest in her project”. The temporality, or sense of the exhibition as a moment, is not only exciting to witness, but also falls in line with the roots from which it draws meaning and inspiration. Finishing the play, the demonstration, the political rally, this merry band of artists moves on to the next site of action.

This action however does not happen in the street, but has been moved into the garden. This is not an ornamental, expertly pruned English garden, nor is it a wild, untamed green space – this garden is the magic space of myths, folk tales, and children’s books. The expected green is replaced by rainbow hues, everything is abstracted, scale manipulated, and what we know of the colour of day and night erased so that time has no hold. This garden is not found in backyards or through gates, but between, behind, or on the other side of our world – accessible only through rips in our reality. Girard paints these shifting access points into her paintings: a parted curtain, a door, the rainbow path of a snail – they are signs and maps for movement towards utopia.

The characters, of which there are many – Rosa Luxemburg, Martin Luther King, Karl Marx, Mussolini, Franco, and Berlusconi, among others – are abstracted caricatures, faces with phallic noses, cubist bodies. Often they are experiencing a kind of transformation or in the process of being rendered down to absurd and laughable proportions. Neither human nor beast, they stretch from one bodily form into the next, fracture, and remain in constant disorder. The beasts – unicorns, birds, butterflies, owls, snails, and caterpillars – only become more beautiful, with fuller tails, more elaborate feathers, and fancier colours. They are also wise and have been granted the use of language, something the humans have been denied. They are the poets and truth-seekers. They speak the obvious, but it is often these simple lines that give them insight and logic, making them the heroes of these clever allegories. 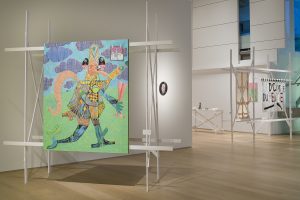 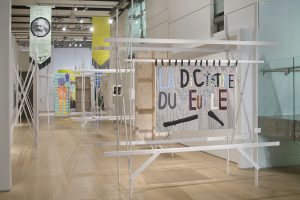 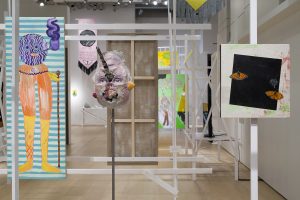 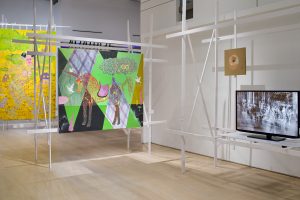 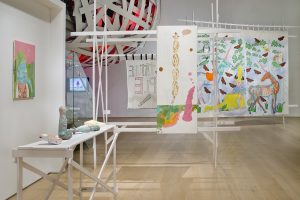 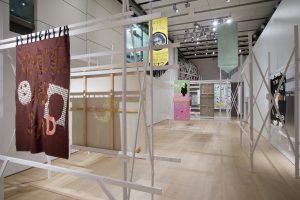 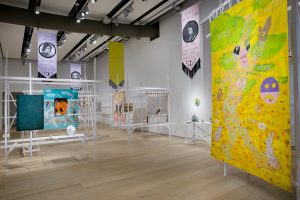 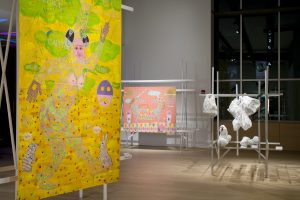 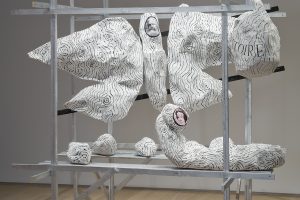 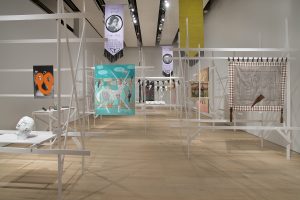 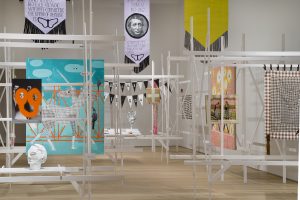 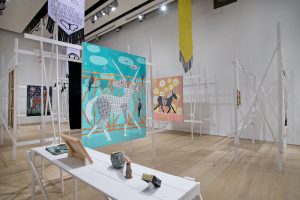 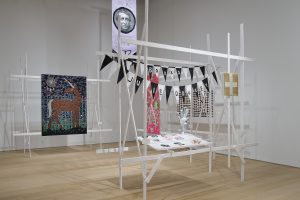 Naomi Potter is the Director/Curator of Esker Foundation in Calgary. Over the last sixteen years she developed numerous curatorial, artist, and residency projects in Canada and Central and Eastern Europe. From 2009-2011, she was curator of Walter Phillips Gallery at The Banff Centre where she produced solo projects and exhibitions with many artists including: Anthony Burnham, Geoffrey Farmer, Melanie Gilligan, Brian Jungen, Ragnar Kjartansson, Silke Otto-Knapp, and Ron Terada. More recently she has worked to develop solo projects at Esker Foundation with Peter von Tiesenhausen, Cedric Bomford, Cynthia Girard, Mia Feuer, Colleen Heslin, and Etienne Zack, to name a few. In 2003, Potter was awarded a year-long Deutsche Akademische Austauschdienst (DAAD) artist residency in Istanbul, and from 2003 to 2007 was co-director of the international artist residency program at CESTA in the Czech Republic. In 2015 she was a guest of both the Australian Arts Council and British Council International Curatorial Visit programs. Potter holds a BFA from the University of British Columbia, Vancouver, and an MFA in sculpture from Concordia University, Montreal.