Fin Simonetti works with sculpture, installation, and drawing to investigate the uneasy terrain among our desire for security, states of fragility and vulnerability, and the sensorial, emotional, and psychological relationships we have to objects, bodies, and spaces. Her work adopts forms and imagery with corporal, visceral resonance that poetically undermine our senses of familiarity and ease. An Appeal to Heaven presents recent works in carved stone and stained glass that, through paradoxical relationships between form and material, connect to themes of emergency, protection, and control.

Simonetti’s use of stained glass and stone are resonant with historical and familial connections. She learned to work in stained glass – a trade practiced by generations of Italian immigrant families, including her own – from her paternal uncle who designed and fabricated windows for cathedrals and private homes. Stained glass often evokes thoughts of religious architecture, beauty, and sanctuary, but here, configured into the jagged open jaws of two bear traps, the material suggests something quite different—something threatening, dangerous, yet ultimately disastrously futile in its function.

Running the length of the West gallery, a long black metal railing divides the space; however, unlike the purpose of a typical railing, it is not present here to provide stability or protection. Rather, it acts by enforcing a logic and regulation of movement through the exhibition. Perched atop its narrow surface, a series of objects precariously balance. Carved from Spanish blue alabaster, each piece is a replica of something we might reach for in case of emergency, or for our personal protection. Rendered in cold blue stone, however, these objects are frozen, impotent, and useless.

Following the death of her father, Simonetti began stone carving in 2017 as a way to process their complicated relationship and her grief. Double Bind, from that year, is the head of a muzzled pit bull rendered in flesh-like Portuguese pink marble. The pit bull is a recurring figure in Simonetti’s work, emblematic of a weaponized body that is popularly objectified as a representation of power, threat, and masculinized violence. However, pit bulls also symbolize protection, security, and enjoy a close relationship with humans as “man’s best friend”.

Within each of these bodies of work, the concept of the body runs as a through line. As Simonetti articulates, she is interested in “the unstable line between the body that is a threat and the body that is threatened.” In these works, our bodies and the bodies of others become sites for excavation, emotional and physical; they are replete with fissures and sutures and are also subject to the authority of objects and architectural design—devices of control that make the viewer acutely aware of their own body in space. 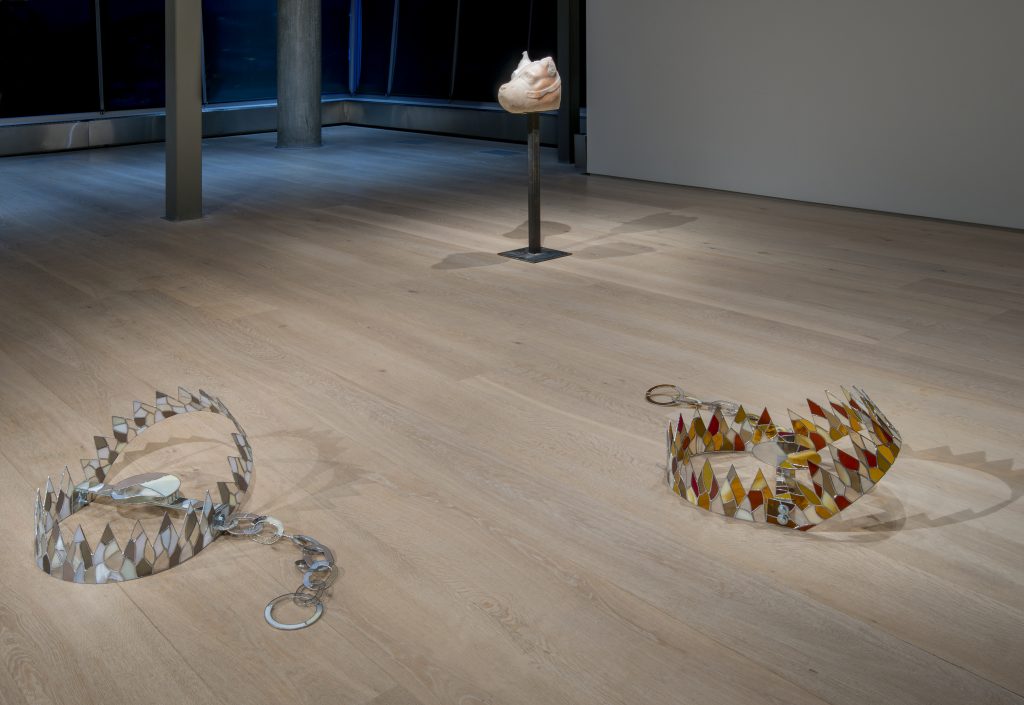 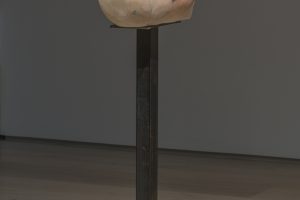 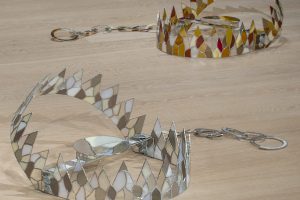 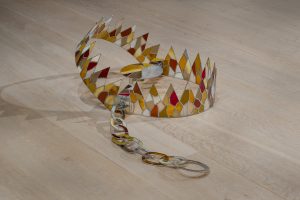 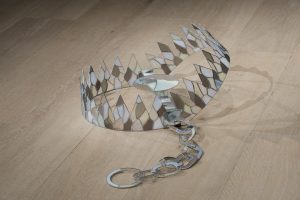 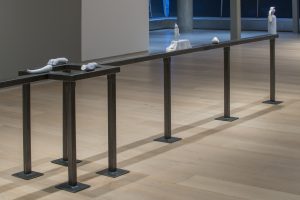 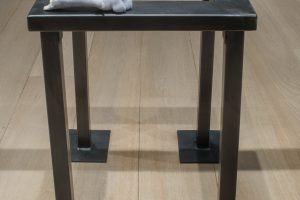 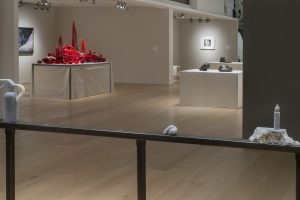 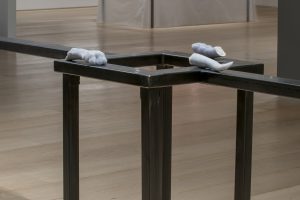 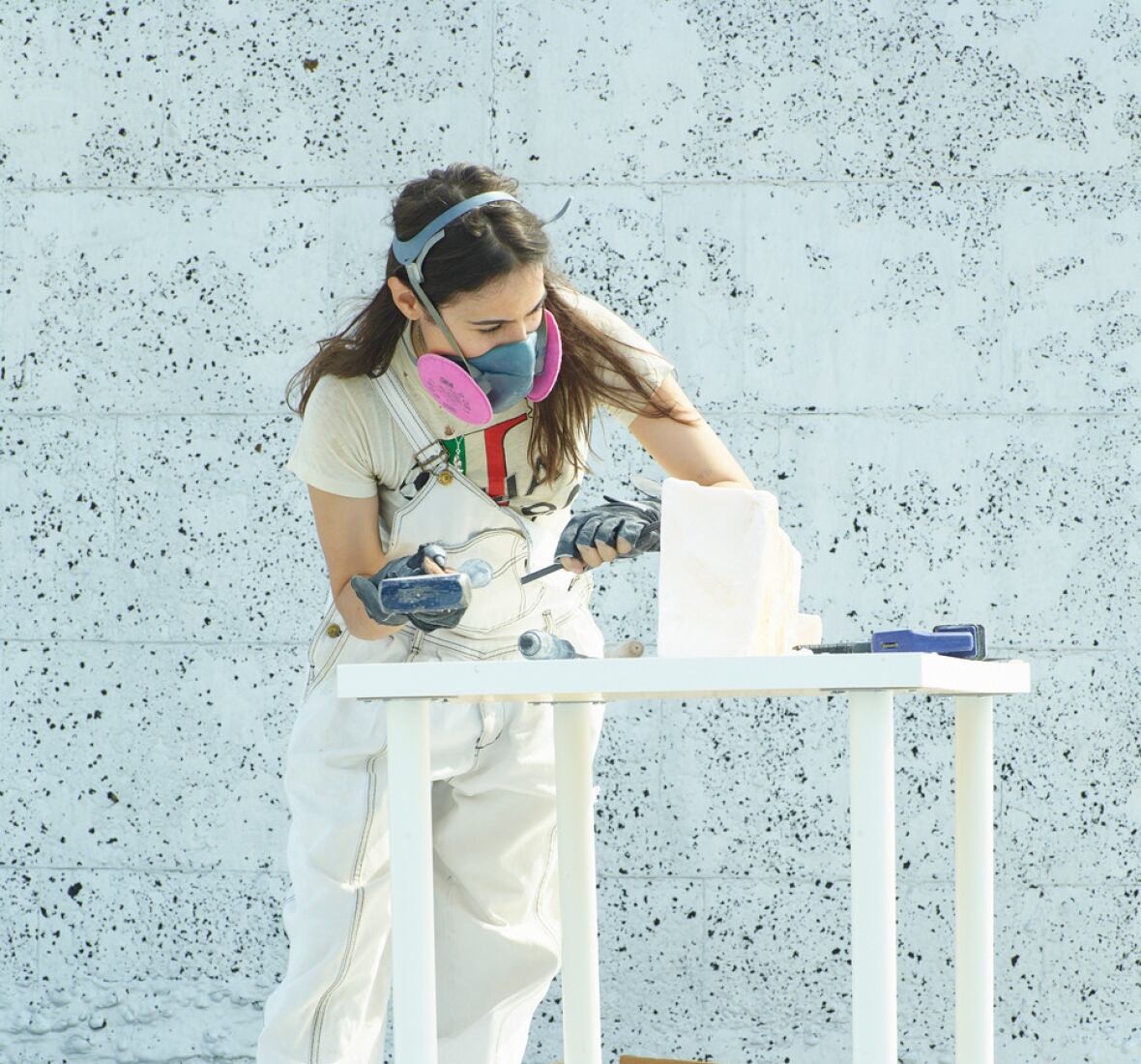