I AM A HOLE IN WALLS OF BUILDINGS is an installation which uses sculpture, light, kinetic devices, sound, and re-appropriated objects to create a framework for an emotional and reflective experience. Located in a highly visible yet inaccessible window space, the work depicts a variety of unremarkable yet familiar desires and failures and is absorbed in a contradictory and compulsory relationship with loss, longing, and loneliness.

Through physical and material mimicry, imitations of nature oscillate between authenticity and artificiality in a way that is never stabilized but delicately balanced. Handmade components take ownership of their imperfections, exposing the process with which they were made. 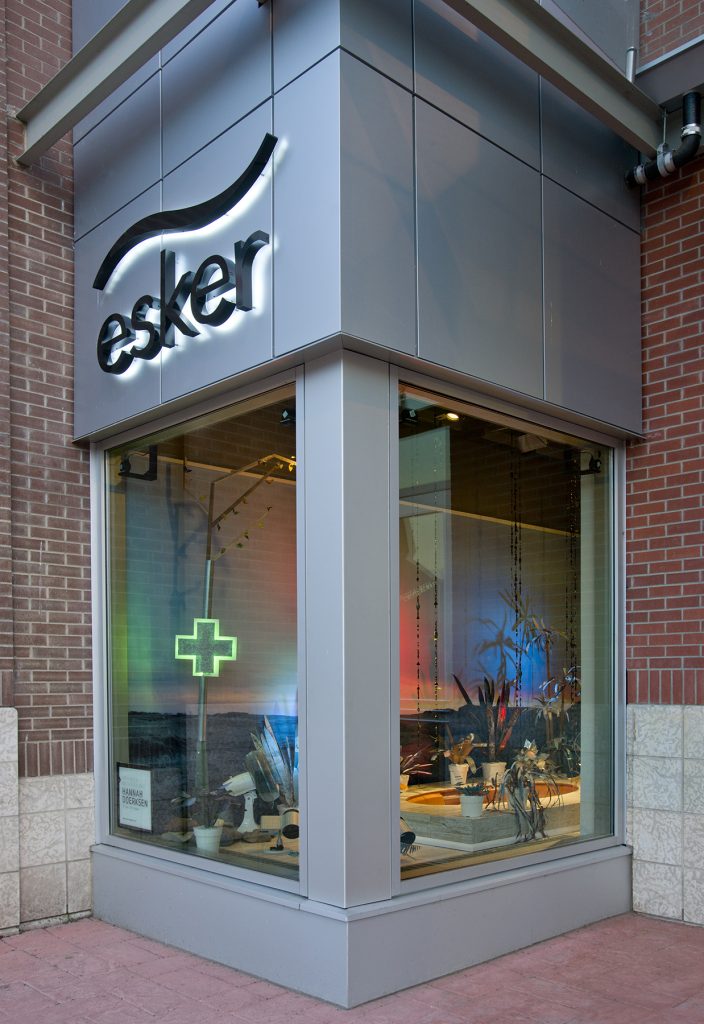 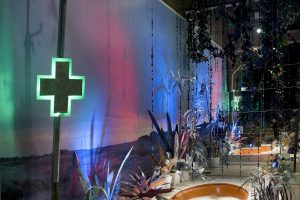 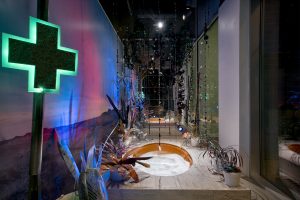 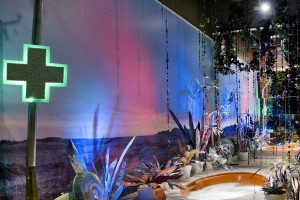 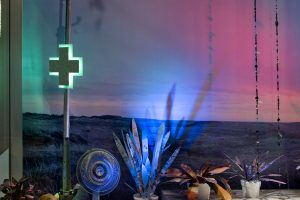 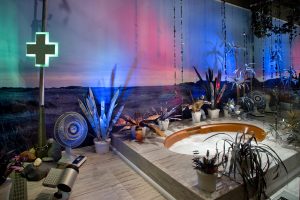 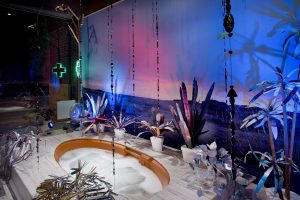 Shauna Thompson: First of all, what do you imagine is an ideal encounter with this installation?

Hannah Doerksen: I like to imagine an individual coming upon the installation unexpectedly, perhaps on a walk home from work, or from the bar, or from the library, or wherever, but they are alone and maybe a little lonely or down in the dumps. They walk up to it and they might not be sure at first if it is even art, but the lights or the movement or the images draw them in. In this scenario it is dark out, the streets are quiet, and the passerby can hear the music without being interrupted by traffic or pedestrians. And the person just gets to stand there and listen and watch for a time. I hope the installation and the objects inside trigger emotions, memories, or ideas so that the viewer is able to project their own lived experience onto the work. I would like them to feel a companionship with the piece and maybe leave feeling less alone.

ST: As you have in this instance, you often speak about the hope that your work will evoke an emotional response in the viewer. When you’re making or considering objects, are there particular techniques you use to achieve this? In what ways do you think about the role of mimicry and empathy?

HD: In thinking about emotional responses I only really have my own triggers to use as a gauge, so I chose objects, sounds, images, colours, and techniques that I respond to. I think because the work is obviously labour intensive, while at the same time unrefined and imperfect, it is inherently empathetic and somehow invites people to feel sorry for it, or to regard it as an underdog that they need to support. It is important that the objects I make and collect are familiar so that the viewer already has a relationship with those things, but it’s also key that the objects are kind of weak imitations – but weak imitations with heart; they really did put in an effort to be like the things they are mimicking, but they just aren’t made of the right stuff. I think that is where some of the emotion comes from.

ST: There is an audio component to this work; a track featuring a sort of melancholy and eerie – yet hopeful – Theremin or musical saw. Where does the song come from and why did you include it here? What do you think about the function of sound in this installation?

HD: The song playing outside of the exhibition was written by Jack Nitzsche and plays at the beginning and the end of the film One Flew Over the Cuckoo’s Nest. (Click here to listen on YouTube) One of the central characters in the story is Chief Bromden, a patient who has been at the mental hospital longer than any of the others and who pretends to be deaf and unable to speak until he finds confidence through his interactions with the very badass Randle P. McMurphy.

The final scene in the film, during which the song plays, begins with Bromden suffocating McMurphy to release him from life as a vegetable after he has received a vicious lobotomy. After McMurphy expires, Bromden walks to the bathroom and rips a sink out of the floor, which releases an eruption of water from where the pipes have been severed. Bromden carries the sink to a large window and tosses it through. He then climbs through the window, escaping the mental institution, and runs off into the nighttime landscape towards an uncertain future.

There are many nice ties to this song and the way I am thinking about my installation. First of all, the melancholy tone of the song has the power to suggest a feeling for my audience right off the bat, and this moves the piece in a cinematic direction. I also love the parallel of the release of water erupting from the torn-out fountain in the film and the bubbling tub of water in the installation. Hot tubs carry this promise of comfort and an expectation that they will relieve one of stress and tension. The hot tub in my piece is not really a functioning one and, even if it were, the viewer is never given access to it.

This installation is a sort of visual representation of a fantasy that I have, and I imagine others do too, of one day finding this comfortable, serene place in life. I am really uncomfortable with this fantasy, which I believe is ultimately unattainable. I am unsure as to whether it is important and helpful to hold on to this fantasy, or if you become trapped and disadvantaged by the idea that things could always and should always be so much better. I like the idea of throwing something through the window, smashing the glass that keeps this fantasy locked up, and it being unclear whether you are trying to get into it or get the hell away from of it.

ST: You’ve obviously thought a lot about the role of the window with this installation in terms of its offer of this tenuous promise and its ultimate denial of it. Could you talk a little bit more about what the window suggests about desire and failure?

HD: The fact that the viewer is restricted from entering the space carries a lot of the weight of the piece. In talking to viewers, the questions of whether I will get inside of it and do some kind of performance, or whether they could be allowed to climb in and go for a dip inevitably comes up. In this way the piece is inherently tied to disappointment – no one ever gets to go inside. Because the exhibition space is on the street for anyone to see, it is visible in a way that many art spaces fail to be, however, at the same time, it is exclusionary and reminds the passersby of just one more place they are not entitled or invited to enter. A comparison could be made to storefront windows, which display wealth that much of the population cannot hope to attain. It is a reminder of the fantasy that may never be realized. That being said, I think the piece is committed to maintaining hope, or at the very least finding humour in the struggle.