Curated by Dr. Sarah Stanners under the auspices of the McMichael Canadian Art Collection, Kleinburg, Ontario.

In the most classic sense, the word studio is defined as “room for study.” This exhibition was conceived as an opportunity to gather 20 select paintings in a new space with the aim to spark study – in the form of looking and conversation.

Five works on show have never before been exhibited in Canada. Fifteen of the paintings were made in the artist’s small one-room studio in his family home at 1 Eastview Crescent in North Toronto, while the remaining five were produced in his downtown Toronto Wolseley Street studio, where he would execute most of his very large paintings from 1968 until his death in January 1977.

In his early days of painting at home, the artist’s sons would often help their dad to unroll, cut and stretch his canvases. Before stretching finished works, the canvas would be tacked up on a wall in the one-room studio with a large window looking out to the front yard. A record player, radio, and the family piano were all permanent fixtures in the space, along with a working sink so no mess would be tracked through the house. Conversations on art often spilled out to the back garden where Jack’s wife, Mabel, lent many words of wisdom from looking at paintings, as they were finished, or as they were in progress. On occasion, paintings were propped against the hedges as the couple sat outside in the good weather with refreshments. Beyond the paintings, Mabel’s honest advice about business and the art world was also valuable.

In August 1968, the young artist Milly Ristvedt called Jack Bush to say that she had a studio near Queen and Bathurst Streets in downtown Toronto that might work for him. Milly would use part of the space to live and work, while Jack could take a portion to strictly paint. Jack had 41 years of working in commercial art studios behind him, and nearly a lifetime of painting his fine art work at home. He was – at the age of 59 – more than ready to have a space away from work and life to paint. After installing a partition wall and locking door, Jack’s Wolseley Street studio measured 35 by 56ft. He placed a false wall along the east side of the studio that measured 20ft long by 8ft tall where he would tack up his cut canvas for each new painting.

When the artist settled into working at this new studio, he hired various assistants for the more physical tasks of his practice and by 1973 he enjoyed the company of the artist Alex Cameron as a long-term studio assistant. Artist Dan Solomon was another studio mate and the space hosted numerous visits from other artists, collectors, critics and art dealers. Finished paintings were unrolled and conversations were sparked. Jack’s most constant partner in the studio was music: jazz and classical always topped his charts.

The most intimate conversations held in the studio were between Jack and his primary subject: colour. He once told curator and critic Karen Wilkin that colour would speak to him – telling him what colour might be placed next, and so on. The studio was a sounding board for the artist; a place to face dead ends and challenges; a place to test colour and make it sing; a place to both putter and make grand statements; and, most of all, a place to be absorbed in art.

While many bright and powerful paintings were born in his studio, his workspace and manner of being was never aimed at putting on airs. Simple bowls for paint, a lawn chair transferred from the garden to downtown, Sanka for a pick-me-up, and an on-again-off-again struggle with alcohol were all in the backdrop while people and paintings came and went.

On 24 September 1968, Jack reflected on one of many studio visits from the New York art critic Clement Greenberg, who was, by most accounts, a veritable heavyweight champion of studio critiques in the circles of modernist painting:

Clem liked all the work, but 2/3 just very good, and 1/3 exceptional. He said ‘Your diffidence is not in your manner, it’s in your work! You don’t want to be a great painter – just a good one. Let go! When I write a piece I let go – my way. Fuck the world! It’s what I want to say! Your paintings are still hold-backish. Let go! And bear down – do anything you feel like – & fuck the art world! Then your message will come through so strong, no one will doubt you. Your color is so wonderful – like no body else’s – but you stay safe in pat formats – screw them up, on purpose!’[1]

Not even a year after Jack had secured his downtown studio, his health took a turn. Diagnosed with angina in the spring of 1969, his heart condition limited his time in the studio to no more than three hours per day, as instructed by his doctor. The physical impact of his ailing heart lead to material changes in his art: for a year or so, his canvases tended to be smaller, or at least long and narrow so he would not have to exert himself in stretching across large surfaces or raising his arms above his head. Diving dart shapes invaded his flat fields of colour during this difficult year, signifying the feeling of his chest spasms.

It wasn’t the first time that a health condition had made an impact on his art. Five or six years previous, when he was exclusively painting at home, Mabel’s eyes grew increasingly sore and weepy. It was finally determined that the noxious nature of his solvent-based Magna paint was affecting his wife’s health. In 1966, Jack turned entirely to the use of water-based acrylic paint, effectively releasing Mabel from her suffering.

Over his fifty years of painting, barely nine involved his relatively large out-of-home studio on Wolseley Street. Works for this exhibition were selected with this ratio in mind; the point being to demonstrate that Jack was able to ‘go big’ from home, working with what he had. His post-1968 years came with more space – both in the literal sense of his larger downtown studio and in the sense of retiring from his day job. These years began with serious physical health challenges, which eventually ceded to the pressure (his own personal compulsion) to produce great art.

[1] Jack Bush’s diaries are held in the Jack Bush fonds at the EP Taylor Research Library & Archives at the Art Gallery of Ontario and are restricted without permission to access from the Estate of Jack Bush. 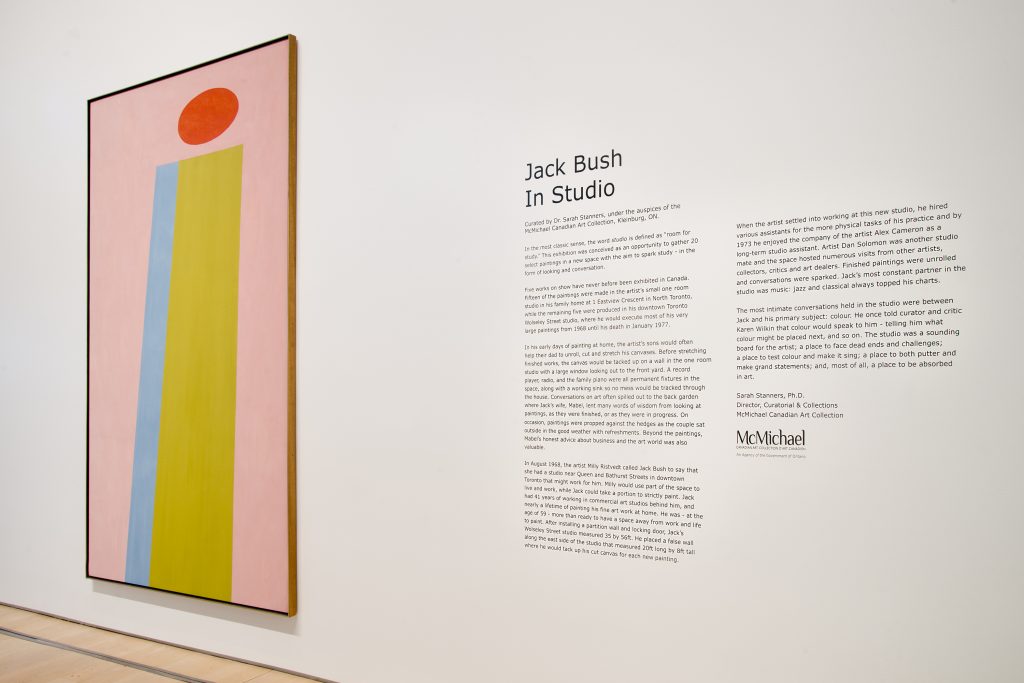 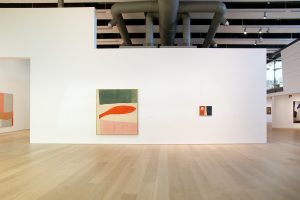 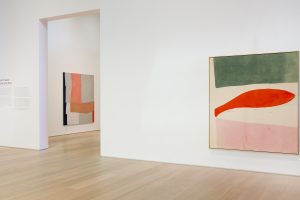 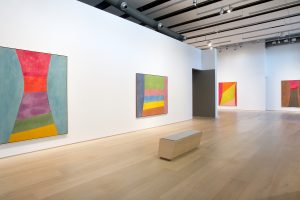 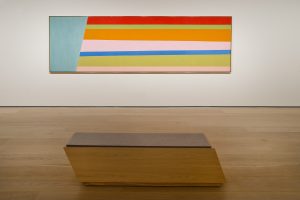 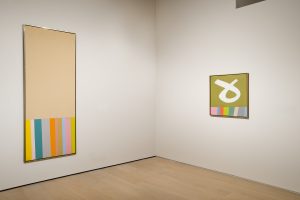 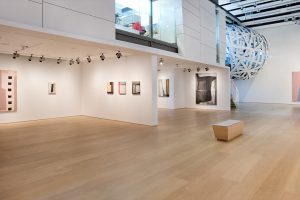 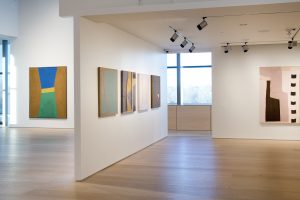 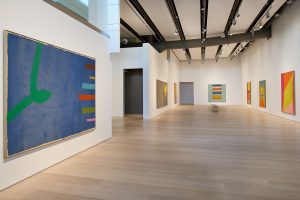 Though raised in Montreal, Jack Bush (1909-1977) was born in Toronto and would spend his adult life there. His art and his ambitions took his career to great heights across Canada, as well as London, and especially New York. Included in Clement Greenberg’s seminal Post Painterly Abstraction exhibition (1964), as well as a solo show at the Museum of Fine Arts, Boston (1972), Jack Bush remains a celebrated Colour Field artist. His beginnings, however, were beholden to the Group of Seven; working as a commercial artist by day and painting landscapes in his off time. He was a member of the Canadian Group of Painters (CGP), Royal Canadian Academy of Arts (RCA), Ontario Society of Artists (OSA), and later Painters Eleven, which was all left behind in the early 1960s as he struck out to make his own audacious marks in the late bloom of his life.

Dr. Sarah Stanners is currently the Director of Curatorial & Collections at the McMichael Canadian Art Collection, Kleinburg. Dr. Stanners completed her Ph.D. in art history at the University of Toronto (2009), as well as a SSHRC Postdoctoral Fellowship at the University of British Columbia, Vancouver (2009 – 11). She most recently co-curated the major Jack Bush retrospective at the National Gallery of Canada, Ottawa (Nov 2014 – Feb 2015) with their Director and CEO, Marc Mayer, which toured to the Art Gallery of Alberta, Edmonton (May – Aug 2015). Dr. Stanners is the author of the forthcoming Jack Bush Paintings: A Catalogue Raisonné, which is affiliated with both the McMichael and the Department of Art, University of Toronto (due to be released in 2017).

Though raised in Montreal, Jack Bush (1909-1977) was born in Toronto and would spend his adult life there. His art and his ambitions took his career to great heights across Canada, as well as London, and especially New York. Included in Clement Greenberg’s seminal Post Painterly Abstraction exhibition (1964), as well as a solo show at the Museum of Fine Arts, Boston (1972), Jack Bush remains a celebrated Colour Field artist. His beginnings, however, were beholden to the Group of Seven; working as a commercial artist by day and painting landscapes in his off time. He was a member of the Canadian Group of Painters (CGP), Royal Canadian Academy of Arts (RCA), Ontario Society of Artists (OSA), and later Painters Eleven, which was all left behind in the early 1960s as he struck out to make his own audacious marks in the late bloom of his life.