In 2010, Kevin Schmidt crafted a cedar billboard emblazoned with foreboding messages from the Book of Revelations, offering apocalyptic warnings of pestilence, famine, and torture. Schmidt then travelled from Vancouver to the Northwest Territories to place the billboard on the ice of the Northwest Passage north of Tuktoyaktuk, a once nearly impassable area that, as its ice gradually melts, has become a site of interest for resource extraction and trade facilitation. With the springtime thaw, the ice melted and the billboard sailed onwards into the Northwest Passage. It has not been seen since.

The resulting work, A Sign in the Northwest Passage, documents the delivery, installation, and subsequent search for Schmidt’s silent missive. An immersive, multivalent work that includes photo and video documentation housed partially within a white tarpaulin tent, A Sign in the Northwest Passage blurs the boundaries between durational performance, conceptual art and installation and asks powerful questions about climate change, material dependencies, Arctic sovereignty, and colonialism.

The Northwest Passage is a historically and geopolitically contested area. Located roughly 800km north of the Arctic Circle, it has been a site of interest as a potential trade route between the Atlantic and Pacific Oceans since at least the 17th Century, despite the fact that its vast amounts of ice once made it insurmountable to cargo ships. In recent years, however, the ice has melted far more rapidly than climate scientists had initially anticipated, leading to predictions that the Passage will soon be navigable year-round and amplifying geopolitical conflict over access to the region and its resources. The Northwest Passage has also factored heavily in discussions about colonialism and indigenous sovereignty in Canada. For thousands of years the region has been inhabited by Inuit communities, which are profoundly impacted by state decisions and industry actions in the area.

Ultimately a simple gesture, Schmidt’s strategic deployment and documentation of his apocalyptic prophecy speaks volumes to the issues manifesting themselves in the Northwest Passage’s contested waters. Photo and video documentation of Schmidt’s process offer highly different views of the Northwest Passage during the winter and the summer, while also providing brief glimpses of the everyday lives of the region’s inhabitants – images that unsettle and critique romanticized notions of wilderness and the North. The billboard’s ominous forecast of plague and natural disaster is evocative of the collective anxiety surrounding this rapidly changing landscape. But Schmidt’s prophecy does not offer absolution: the billboard’s presumed fate to become detritus amid the melting ice implicates the artist in the consequences of human activity on the environment, while conversely underscoring our tenuous stake on the land. 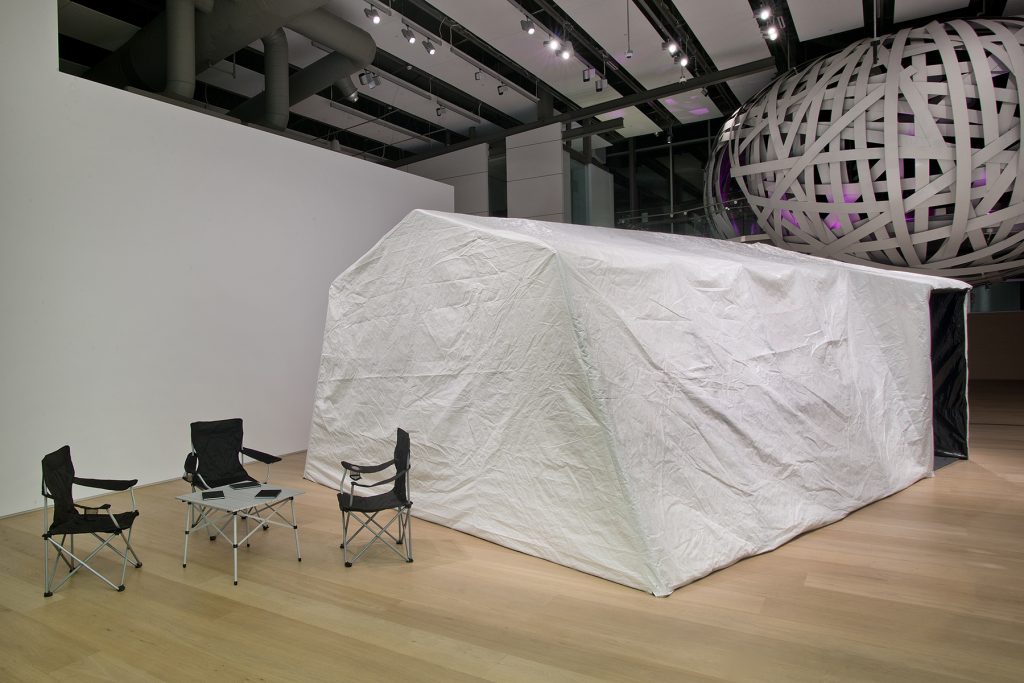 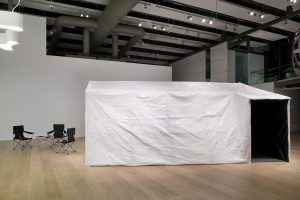 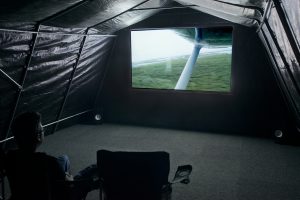 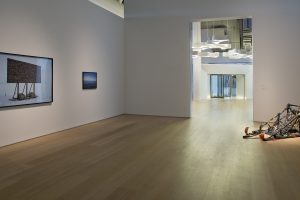 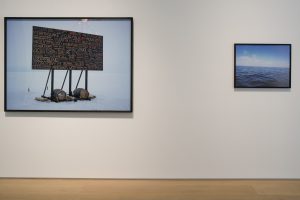 Kevin Schmidt has exhibited widely in Canada and internationally, with recent solo shows at galleries including: Contemporary Art Gallery, Vancouver (2014); Künstlerhaus Bethanien, Berlin (2013); Justina M. Barnicke Gallery, Toronto (2011); and The Power Plant, Toronto (2011). His work was also recently included in La Biennale de Montréal (2014), as well as in group exhibitions at Insitu, Berlin (2014); and The Jewish Museum, New York (2014). Born in Ottawa, Kevin Schmidt is currently based in Vancouver and Berlin. He holds a BFA from the Emily Carr Institute of Art and Design, Vancouver and is represented by Catriona Jeffries Gallery, Vancouver.