Mia Feuer is interested in the post-natural landscape, visible sites where human interaction – be it personal, social, political, or financial – has altered or is in the process of rapidly changing the land, and thus our relationship to it. Her work makes connections between our intense material dependency and the accelerated environmental impact this creates. Although she does not consider herself an activist, she is propelled by a genuine sense of compassion, fueling a commitment to engage with damaged, marginalized, or threatened places.

A turning point for Feuer came at a graduate critique of her work in 2009, when a fellow student asked a simple question: “How can you criticize the cycle of oil production and consumption if your work is entirely made out of petroleum products?” The proverbial light bulb went on, and what resulted was not a change in her material choices, but in the depth she went to try to understand the politics, economies, production, and environmental legacies that her choices were actively contributing to. The resulting sculptural works are characterized by an innovative, informed, and critical approach to material.

To write about Feuer’s work is also a little like writing a travel log; date, location, and experience all being important markers for the direction each work will take. However, it is ultimately the combined experience of all her travels that finishes each piece and, subsequently, it is the holistic knowledge that these places are linked that gives the work its political and environmental thrust. Unprecedented loss of land due to pollution, change in weather patterns, extreme salt water erosion, or toxic environments have all guided the artist’s compass. Recent travels include: the Suez Canal in Egypt, the West Bank, the abandoned Soviet coal mining town of Pyramiden, the Arctic coast, reclamations sites in the Athabasca Oil Sands, or, most recently, the southernmost bayous of Louisiana in the communities of Pointe au Chien and Isle de Jean Charles Biloxi-Chitimacha-Choctaw Indian tribes. The vocabulary of all of her sculptures comes out of this aggregated travel log, each entry adding to the undeniable truth that we are all geopolitically and ecologically enmeshed.

The resulting installations and sculptural works are dense, massive, and frighteningly bleak prophecies. Collapsed Soviet coalmines find common ground with bombed out buildings in the Suez Canal; trees feathered and tarred in the Athabasca Oil Sands sail alongside crystal blue glacial tongues of the Arctic Circle. Synthetic chandeliers of industrial waste mix and float among the black wings of ravens, a sky that pours down stinking pitch, an inky rink at the end of the world. Feuer stands at the centre of the storm, creating brilliant and ambitious work that calls attention to these damaged sites, but also surprisingly finds beauty and hope amidst the crushing mess. While the tempest of political upheaval and economic growth rages on, the legacy of waste that washes away our shores, tangles in our nets, and stains our landscape is fuel for Mia Feuer’s fire. 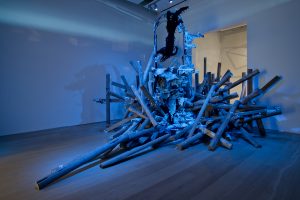 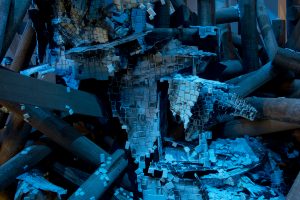 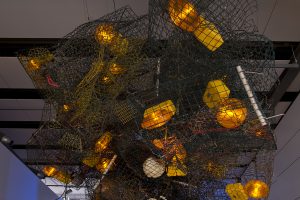 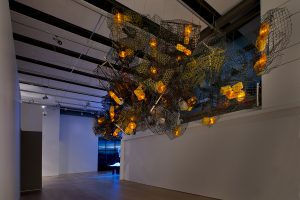 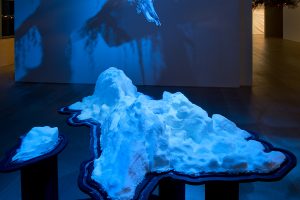 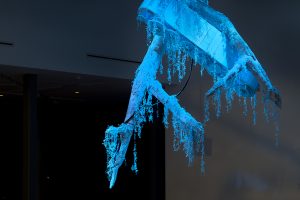 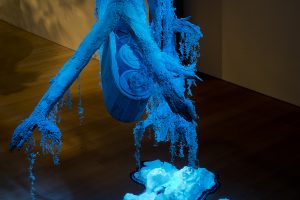 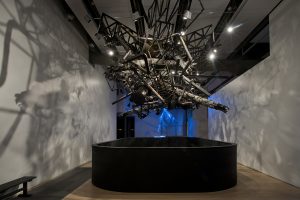 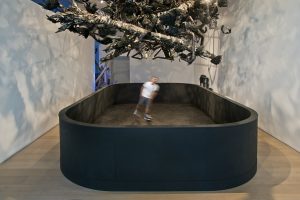 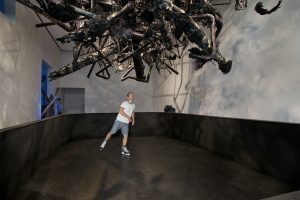 Born in Winnipeg, Mia Feuer received a BFA from the University of Manitoba in 2004 and an MFA in 2009 from the Department of Sculpture + Extended Media at Virginia Commonwealth University, Richmond. The artist currently lives and works in Oakland where she is an Assistant Professor of Sculpture at California College of the Arts.

Feuer has received numerous travel, research, production, and creation grants from the Manitoba Arts Council, the Canada Council for the Arts, and the Lila Acheson Wallace – Reader’s Digest Wallace Foundation. In 2007, with the support of the Winnipeg Arts Council, she traveled to Palestine to facilitate research and workshops in the West Bank with Palestinian children. Feuer has received several fellowships including: Vermont Studio Center, Seven Below Arts Initiative, the Mid Atlantic Arts Foundation, the Millay Colony for the Arts, The Macdowell Colony, and the Bemis Center for Contemporary Art and Sculpture Space. Other achievements include the D.C. Commission for the Arts & Humanities Fellowship (2011), the Trawick Prize (2011), and the Joseph S. Stauffer Prize from the Canada Council for the Arts (2012).

In 2011 she conducted research in Egypt during the Revolution, and in 2012 and 2013 gained unprecedented access to the Alberta Tar Sands. She has participated in an Arts and Science expedition to the Arctic with The Arctic Circle (2013) and as a visiting artist at The Banff Centre during the Re:Making residency lead by Peter von Tiesenhausen (2014). Solo exhibitions have been held at: FLUXspace, Philadelphia; Transformer, Washington; Arlington Arts Center; The Firehouse Gallery, Burlington; Atlanta Contemporary Art Center; CONNERSMITH., Washington; Goodyear Gallery, Dickinson College, Carlisle; RAW: Gallery of Architecture & Design, Winnipeg; Corcoran Gallery of Art, Washington; and duPont Gallery at the University of Mary Washington Galleries, Fredericksburg.

In 2014 Feuer curated the Flooded Lecture Series, which took place on boats in the Anacostia River in Washington. Recently, she has been conducting research in the devastated bayous of the Gulf Coast and is currently developing several projects with the federally unrecognized Indigenous Pointe-au-Chien and Isle de Jean Charles communities. Upcoming residencies include the Va Space Residency in Isfahan, Iran (June 2015) and the Gullkistan residency in Laugarvatn, Iceland (January 2016).