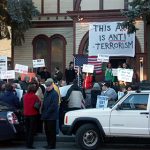 Hudson Mohawk Independent Media Center has produced a definitive account of the whirlwind of events surrounding Wafaa Bilal’s controversial art exhibit, Virtual Jihadi. Art≠Terrorism goes beyond the sound bites to find out what happened when an Iraqi artist came to Troy, NY only to be censored—not once, but twice. First, Wafaa Bilal was chased off campus after his artwork was mis-characterized as terrorist propaganda by undergraduate bloggers. When the exhibition was given refuge by The Sanctuary for Independent Media, the city government responded by shutting down the space.