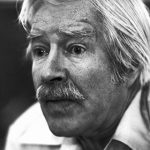 The late Canadian painter Jack Bush said he painted “from the belly.” Born in Montreal in 1909, he earned his living as a commercial artist until his work gained recognition in the New York art market in 1968. In an interview given before his death, Bush spoke about his life, his work, and the development of art in Canada. This film includes images of exhibitions of his work, in particular a retrospective at which he and his friend Clement Greenberg, noted New York art critic, talk about his paintings.