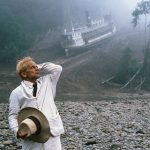 Fitzcarraldo is a 1982 West German surreal adventure-drama film written and directed by Werner Herzog and starring Klaus Kinski as the title character. It portrays would-be rubber baron Brian Sweeney Fitzgerald, an Irishman known in Peru as Fitzcarraldo, who is determined to transport a steamship over a steep hill in order to access a rich rubber territory in the Amazon Basin in order to build an opera house in his hometown Iquitos. One of Werner Herzog’s best known films and a film classic of all times.

There will be a short intermission halfway through the film.