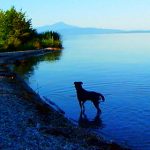 Winner of the Jury Prize at the 2014 Cannes Film Festival, Goodbye to Language is a triumphant masterpiece from Jean-Luc Godard. The film follows a couple whose relationship breaks down along with the film’s imagery, which, in its second half, takes a dog’s-eye view of the world. The film is a meditation on history and illusion as its figures merge and weave across the screen along with ideas about romantic love and being-in-the-world.

This film will be screened in its 2D version.