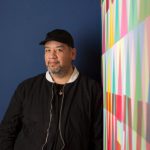 Join us as Jeffrey Gibson discusses his work in the exhibition Time Carriers.

Time Carriers conjures a vision of many hands providing a framework of support, a fluid utopia where trust and movement go hand in hand. It evokes a time frame that both unites and collapses present, past, and future into an undulating and responsive single unit, something that could best be described as community or family. This idea seems especially appropriate when considering Jeffrey Gibson’s work, as it has always pushed to create kinship among unlikely partners.