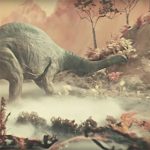 Planet of Storms (Planeta Bur) is a Soviet science fiction film based on a novel by Alexander Kazantsev. Three Soviet spaceships are en route to explore planet Venus, when a meteorite destroys one of the ships. The two other ships decide to continue their mission. When the cosmonauts land on the planet they encounter prehistoric beasts, ancient cities, volcanoes, and vestiges of intelligent life.