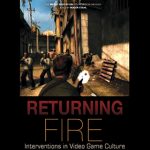 Warfare video game revenues now far outpace even the biggest Hollywood blockbusters. These games offer users a realistic experience of ground combat and the increasingly virtual world of long-distance, push-button warfare. Far less clear, though, is what these games are doing to users, our political culture, and our capacity to empathize with people directly affected by the actual trauma of war. In three separate vignettes, we see how Anne-Marie Schleiner, Wafaa Bilal, and Joseph Delappe have infiltrated war games in an attempt to break the hypnotic spell of “militainment.” Their work forces us to think critically about what it means when the clinical tools of real-world killing become forms of consumer play.