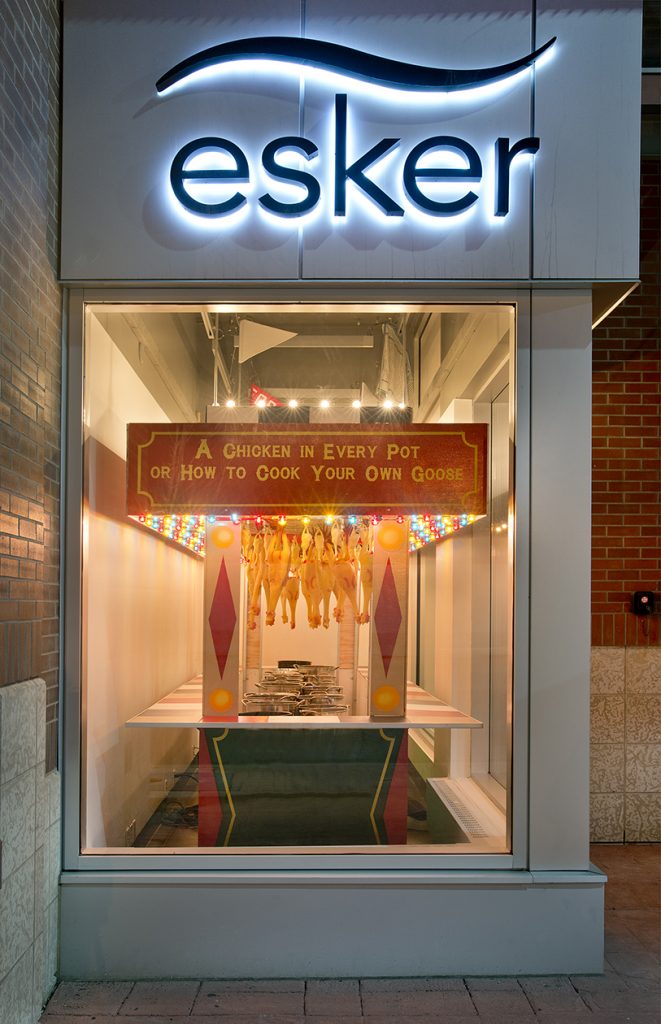 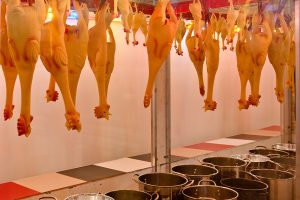 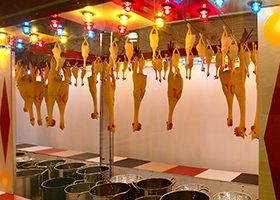 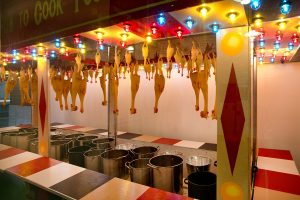 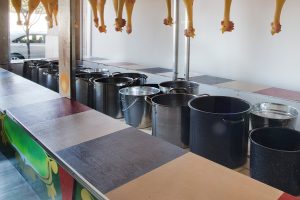 Shauna Thompson: First things first: What is your favourite carnival game? (I’ve always been partial to the dart throw game—there’s something so enticing about those rows and rows of jewel-like balloons waiting to be popped.)

Kyle Beal: Good question. A younger me definitely liked tossing a ball and trying to land it in a coloured cup, and indeed I recall both my sister and I as children winning jumbo prizes on that game, minutes after arriving on the Stampede midway. And after a score like that you really think you have the ‘touch’ to win. Nowadays I like the more explicit gambling games, where you put a dollar on a number and the arrow just needs to hit your number. Easy money, right?

ST: Your work deals extensively with the idea of humour and it often disarmingly employs its various tropes, characteristics, styles, or manifestations. Could you talk a little bit about where your interest in humour comes from and how you see its relationship to contemporary art practice?

KB: My interest in humour stems from an interest in, and the use of, language as a creative and visual tool. This is something that I have invested quite of bit of time in since I was a graduate student, and it continues in my current practice. What appeals to me is a sense that an artwork and a joke often share a similar structure, in that they may rely on some incongruity or conceptual slip so that what is being said or depicted and what is meant are at odds. Or perhaps it has to do with encompassing some larger idea in a compact format. Working with tropes or recognizable forms is a strategy to probe the meaning of those tropes, or to use their familiarity to surprise. Viewers have a certain amount of experience within them that can be factored into the work. Ultimately—and I know I am not alone in considering this—humour has the wonderful ability to open people up to ideas or criticisms.

ST: The installation’s title is a satirical mash up of two idioms: “A chicken in every pot” and “Your goose is cooked.” Could you speak a little bit about the history or meaning of these phrases?

KB: As an interest in comedy goes, so too does an interest in language. Having used idioms in previous works, and having a certain alertness to these sorts of things, I was able to find examples relatable to the general idea of the work as it was developing. In these phrases there was a mirroring of the basic concept or metaphorical structure and yet, as reflections, they have contradictory meanings. The idiom of “a chicken in every pot” is attributed to Henry IV of France. Though it has been picked up and used by others, the original phrase is: “If God keeps me, I will make sure that no peasant in my realm will lack the means to have a chicken in the pot on Sunday!” I think this generally suggests a desire for all citizens to have a basic level of nutrition, or prosperity. Of course a king would be very interested in appearing to be invested in the betterment of his kingdom and its peoples; a wise king realizes that even kings can be replaced. To have one’s goose cooked is understood to be a negative, and refers to the fable of the golden goose.

ST: It’s interesting to think about fables in the context of this installation. A couple of key characteristics of a fable include its: a) involvement of animals or mythical beasts (or other magical objects) and, b) the ultimate moral lesson of the story. Do your chickens and geese gesture to a moral takeaway?

KB: Hmm. I am not quite sure I would go so far as to say there is a lesson or message being conveyed that could work into a concise maxim, but there is at least a moral centre to the work.

ST: The idea of transience seems to be important with this project, not only in connection to the context of the Project Space itself (being adjacent to busy transportation routes, in a transitional architectural space, and changing programming every few months, etc.), but also with reference to the installation’s form. Classic carnival midways are constantly travelling from place to place in a perpetual cycle of setting up and tearing down. There’s a sense of an outside community temporarily settling within an established community, and of course, historically, along with that comes a complex network of social and economic relationships. Could you talk about the connection between the installation’s form and its context?

KB: Well, the city itself informs that sense of transience, and in particular the trio of neighborhoods I was thinking about: Inglewood, Ramsay, and Victoria Park/Stampede Park, as we know it now. And what ties them all together in some ways is the railroad. Though Calgary isn’t really a rail town in the way that Winnipeg is, in the three mentioned communities it has figured prominently in drawing people to live there and in creating opportunities and communities. So with this establishment of communities and business we got the Stampede—the rodeo, of course, but also (though less identifiable or marketed, but, I’d argue, just as important) the midway carnival. And at that time the midway was a tool for modern life (as opposed to the Victorian way of life that was ending); it was a place that served to familiarize and demystify electricity, moving images, and spectacle. It was also a controlled zone for mixing and mingling and challenging and changing older Victorian notions of social bonds and behaviours. So basically what came about was a thoroughly modern city, both in infrastructure and attitudes. Now, in this development we are not unique but, for me, Calgary’s approach and reaction to its developing newness can be very frustrating and/or very exciting, depending on the day. Long story short, the work is informed in its structure very much by the rigged games of the midway, but it also refers to butcher’s windows and abattoirs, as well as the temporary sales offices, lighting stores, and marquee signs in the area. Of course, being a boomtown—as Calgary often identifies itself—is very much akin to playing a game of chance.

ST: Like the titular idioms, the origin of the rubber chicken as a comedic prop or trope is a bit shadowy and mysteriously anecdotal. Regardless of where it came from, it’s amazing that—in spite of changes in taste and comedy—it’s still such a recognizable icon today. We had a chat while you were installing the exhibition about the rubber chicken as a contemporary object and the discomfiting economy of this mass-produced, totally environmentally unfriendly, outdated-yet-somehow-still-relevant, strangely expensive to buy thing. This made me think about the relationship between contemporary socioeconomic ideology and the pay-to-play games of chance and skill of the midway—neoliberalism and rubber chickens. In the context of A Chicken in Every Pot or How to Cook Your Own Goose: who is the carnival barker and who is the mark?

KB: Yes! The rubber chicken is a strange bird indeed—more expensive than a chicken in the grocery store, but without any of the value. There are a wide variety of different rubber chicken products available, though most are of incredibly poor quality, and although some still require being ‘hand-painted’ to be complete, I wouldn’t quite categorize them as ‘artisan.’ They are profoundly unfunny and yet marketed as a timeless comedy prop. Though the origins are a bit murky, the rubber chicken is very much a product of a modern economy and the petrol-chemical age and yet is still something of a leftover.

As for the question of who is the barker and who is the mark within the dynamic of the work, I am not entirely sure. But I can’t help but think of the experience I mentioned in relation to the first question; that is, winning just enough to confuse luck for skill is, in some ways, a pretty apt comparison.