Charlotte Moth’s practice is deeply indebted to history and its cross-references. In the context of this exhibition, British artist Barbara Hepworth (1903-1975) is of particular resonance. Moth is one of very few outside eyes to have ever been invited into Hepworth’s private sculpture studio, ‘Palais de danse,’ in St. Ives on the Cornish coast of England. One of the rooms Moth photographed was the main hall of the ‘Palais de danse’ studio, now replete with empty plinths on caster wheels. Previously, when Hepworth completed a sculpture, she would store it on one of these moveable plinths that could easily be rearranged to make room for the next completed work. Reorienting the sculptures on their itinerant bases, Hepworth choreographed them like bodies in space.

The continual movement of these objects was once referred to in an exchange between Barbara Hepworth and fellow artist Reg Butler in a programme run by the BBC called Artists on Art. Their conversation was focused on how a sculpture is to be experienced. Between them, it was agreed that a sculpture was to be moved around, continuously rearranged and changed within the context of its space, its viewpoint never singular. When it came to sculpture, both artists were “trying to make a living image”; that is, something that wasn’t a substitute for something else that existed in the world, but rather an image or an object that lived autonomously. As Hepworth describes to Butler, “I had a curious image of your sculptures stalking in [my] garden, walking, dancing round solid lumps of rock in my yard, all waiting to be carved.” She continues, “There’s no limit to the materials one can use, but the great thing is to make this live image.”[1]

The exhibition living images is similar in its open proposition to materials, where research, sculptures, photographs, and film provisionally coalesce. Taking on both the role of researcher, as well as documentarian, Moth’s practice involves quiet discernments of the circumstances of her surroundings. Works cross-reference spaces and people that are seemingly remote; Barbara Hepworth and her ‘Palais de danse’; Moth’s own Paris studio and living space; Banff skies; Patricia Lake, Alberta; poet Joshua Edwards; Marfa, Texas; Rathaus, Marl; artist Naum Gabo, among others. These references span varying temporalities, and in that way each work becomes a proposition for the next. A black and white image of a hand balancing an object is rendered in bronze, and then again in telecined 16mm film; a familiar sky becomes a backdrop thrice-over; vitrines in the Tate Britain archives in London have their composites in Calgary; fragments of an essay are now an installation; a mirrored surface is reiterated in a maquette; a framed image reflects the spillage of light from a sculpture that was made to be filmed. Markers exist along the way, as new characters that enter stage left disappear until summoned later on.

All this is to say: take stock of the images that float in the periphery of your vision. Allow for the chance to alter the perspective of an object with a new glimpse. Change a filter, swap the frame, let history seep in, cite what is past, and consider deeply the spaces and images among which we live.

In addition to a selection of recent films, photographs, and sculptural works, Esker Foundation is pleased to present a co-commission of new work made in partnership with The Banff Centre, supported by a Paul D. Fleck Fellowship residency. 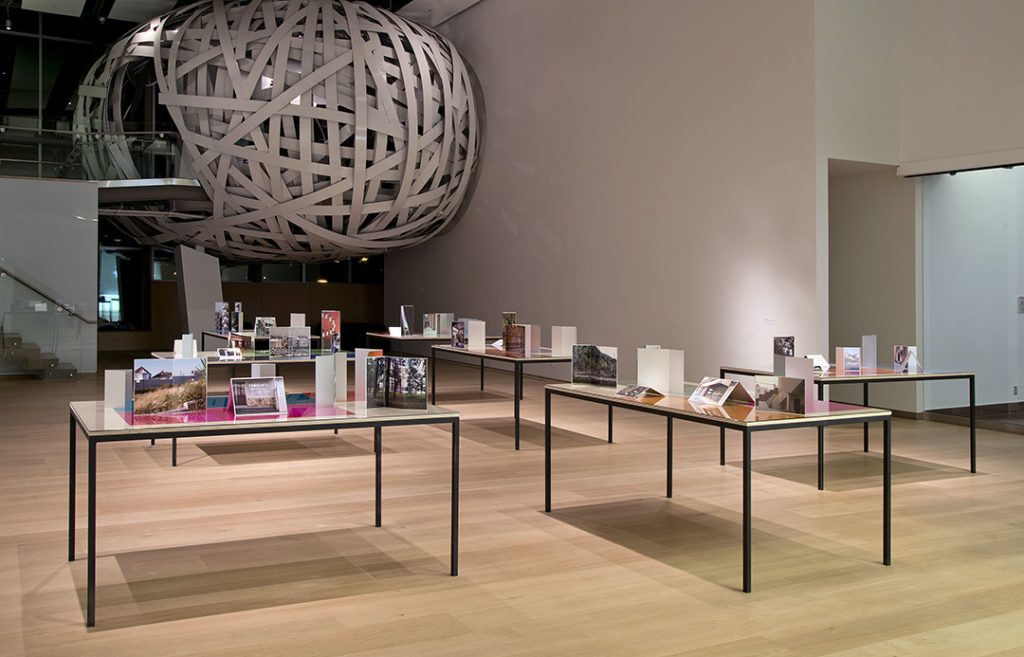 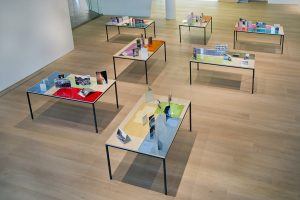 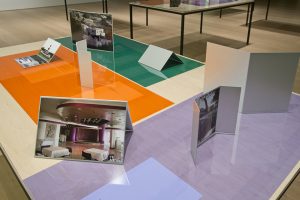 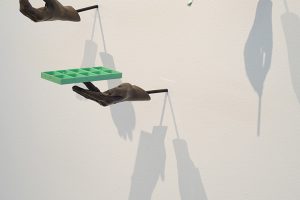 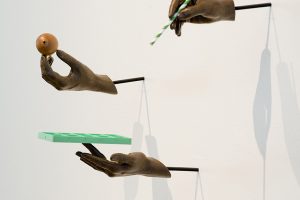 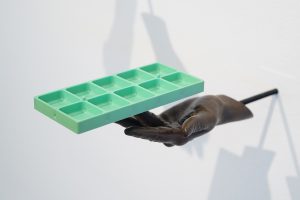 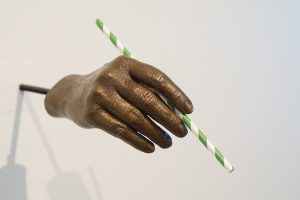 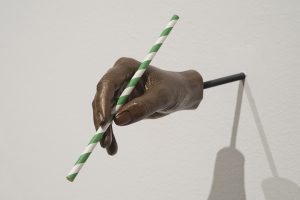 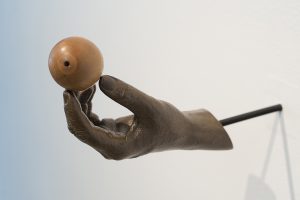 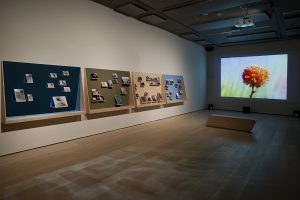 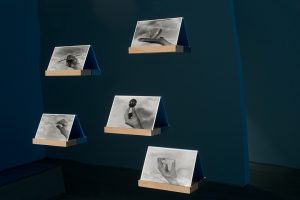 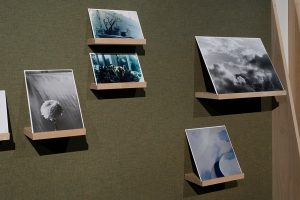 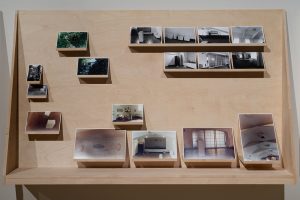 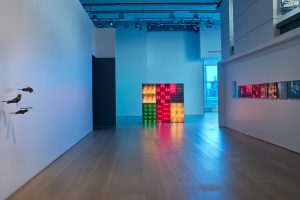 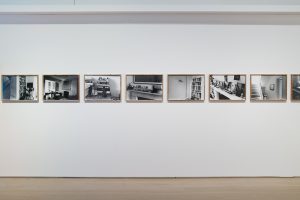 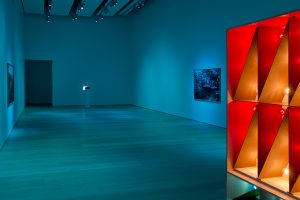 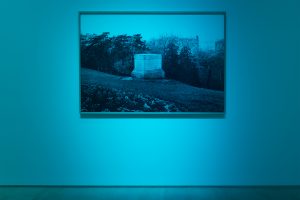 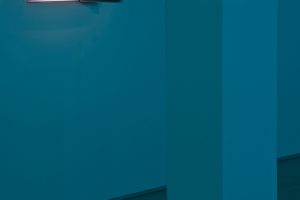 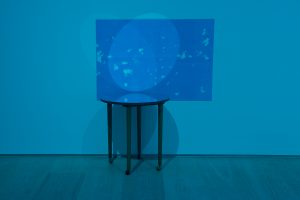 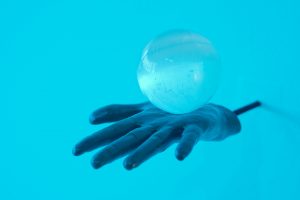 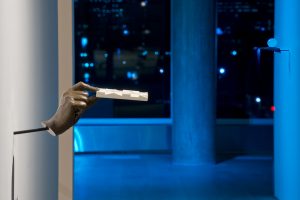 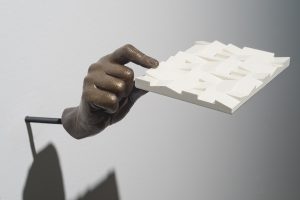 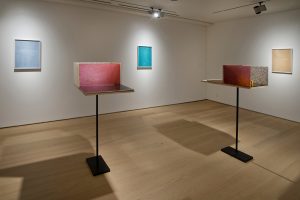 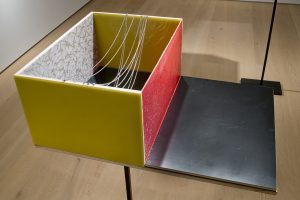 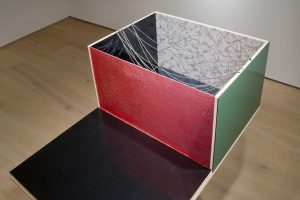 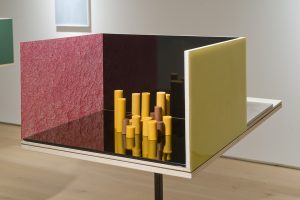 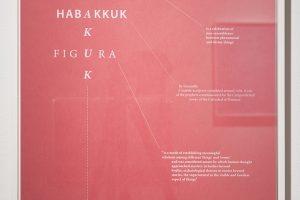 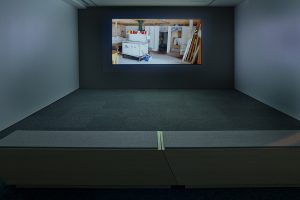 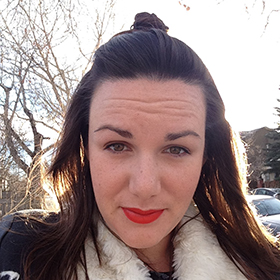 Peta Rake is the  Curator of The Banff Centre’s Walter Phillips Gallery and the Banff International Curatorial Institute. She has curated exhibitions at International Studio and Curatorial Program (ISCP), New York; CCA Wattis Institute for Contemporary Art, San Francisco; Oakland Museum of California; Luggage Store Gallery, San Francisco; Playspace, San Francisco; and Live Worms Gallery, San Francisco. She had previously worked at institutions that include California College of the Arts, San Francisco, and Institute of Modern Art, Brisbane, and was Archivist at Steven Leiber Basement, a Fluxus and artists’ book archive in San Francisco. She writes regularly for C Magazine and her texts have appeared in Canadian Art, Fillip, San Francisco Arts Quarterly, Rearviews, Institutions by Artists, On Apology and ElevenEleven Journal. She holds a Masters in Curatorial Practice from California College of the Arts and was the recipient of the 2014 Curator Award from ISCP in New York. 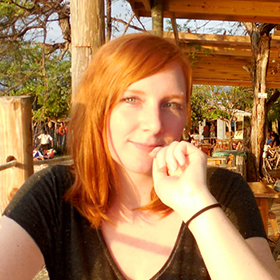 Prior to joining Esker Foundation, Shauna Thompson was Curatorial Assistant at the Walter Phillips Gallery, The Banff Centre. She has also worked with the Justina M. Barnicke Gallery and YYZ Artists’ Outlet, both in Toronto, as well as the Art Gallery of Mississauga. In 2009, she was Press Assistant for the Canadian Pavilion at the 53rd Venice Biennale. Thompson holds a master’s degree in Curatorial Studies from the University of Toronto and a master’s degree in English from the University of Guelph.