In this new site-specific work, Lethbridge-based artist Corinne Thiessen traces the recurring tension among composure and chaos, regimented uniformity and self-conscious release. Using a constructed forest of fragmented trunks salvaged from fallen trees around Lethbridge, Chronic performs an endless choreography of collapse, a cycle of strain and release that speaks to Thiessen’s interest in thinking of failure as an ever-dependable chorus.

Chronic, like much of Thiessen’s work, revels in the notion of the uncanny – the idea that something is at once familiar yet also deeply unsettling. At first glance, the fragmented nature of Chronic’s trees evokes a familiar, almost nostalgic whimsy reminiscent of fairy tales or wind-up lithograph toys. Closer inspection reveals not only the mechanisms dictating the trees’ slow ascent and descent, but also the gradual deterioration of the tree trunks after hours of endless, repetitive movement. These visual signifiers of fatigue, fragility, and mortality take the work into more foreboding territory, provoking thoughts of the body’s eventual tendency towards decay and of the physical and emotional toll of habit, ritual, or addiction.

Indeed, Chronic’s constantly collapsing and re-building trees generate questions about labour, toil, and attendant social expectations surrounding productivity and efficiency. The tree trunks almost seem to linger in their collapsed state, as if to consider the possibility of simply refusing to continue. The discomfort prompted by this prolonged meditation can be revelatory, catalyzing ideas of alternative conceptions of success and the generative potential of failure. 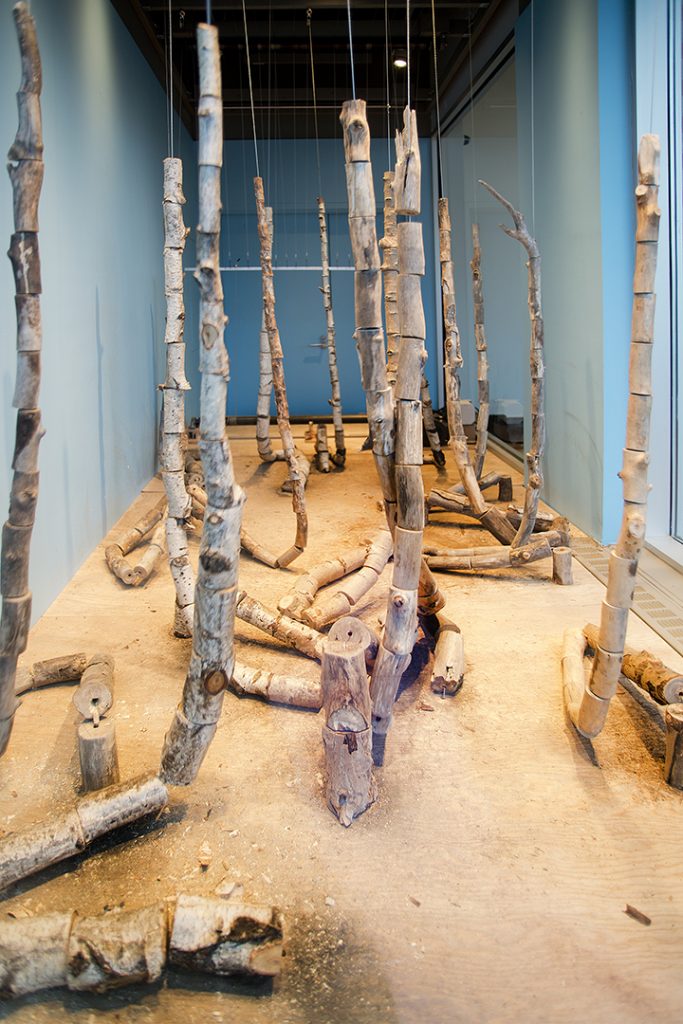 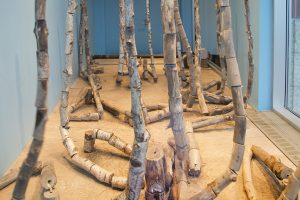 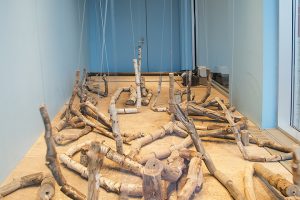 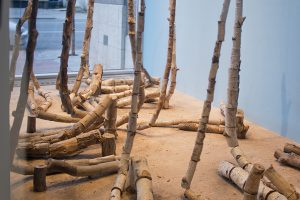 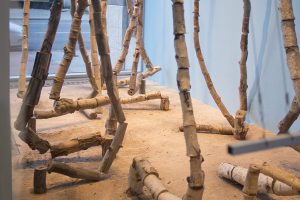 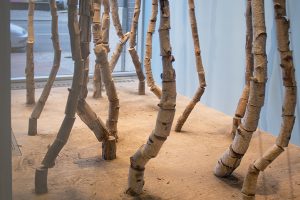 Elizabeth Diggon: The word chronic has multiple associations and meanings, many of which come across in the work. What drew you to this title and what is its significance?

Corinne Thiessen: I was thinking about chronic fatigue, disease and illness, or a constantly recurring habit. Repetition is significant to me. I guess you could say it’s the coziness between addiction and ritual. For some time I had been experiencing mystery symptoms of illness and fatigue with medical tests that came back normal. There is something about exhaustion that makes you vulnerable, (especially in a culture that values strength, rationality, and keeping it all together), which is in direct opposition to an individualistic ideology. These trees are people-like; they’re also in constant flux between holding it all together and falling apart.

I make word lists and associations to brainstorm an idea, especially with the challenge to come up with a title. In this case: fatigue, faint, failure, repetition, obsession, compulsion, cave in, give up, collapse, chorus and refrain, thinking of the trees as a choir, and so on.

The idea of obsession/compulsion as a way of working through trauma got me thinking about battle fatigue – the stress reaction to warfare, or PTSD, employing repeated actions to heal from trauma. Fatigues are also the term for the uniform, and this militaristic orderliness (marching, obedience, conformity, etc.) is a fixation that keeps coming up in my work.

Naomi [Potter] mentioned choreography, which is a beautiful way to describe this collapse, like a dance of failure, a final relaxation or permission to rest. But then you have to get back up again, which could be positive (depression subsiding, one is again able to get out of bed) or negative (in the case where we push ourselves to be productive in the madness of the rat race).

I guess death and mortality wouldn’t be far from this thought – definitely aging and the slowness and vulnerability of it are on my mind with this collapsing forest.

ED: You’ve suggested in the past that you like to engage with and challenge social norms and notions of deviance through your practice. The trees in Chronic are constantly collapsing and rebuilding themselves – a repetitive act that, to me, evokes questions about the futility of endless labour and attendant social expectations surrounding productivity. Could you speak a bit to how Chronic deals with ideas of toil, futility, and social expectations?

CT: Yes, that’s exactly it! The myth of Sisyphus is a constant repetitive narrative I’m obsessed with. As the story goes, Sisyphus was bad and was punished with the curse of rolling a boulder up a mountain for all of eternity, never to reach the top or to go over the other side. I find this story so perfectly summarizes so much of life, like doing the dishes, making food and eating it, cleaning it up, and doing the whole thing all over again. The book of Ecclesiastes addresses this vanity, futility, and existential tension. I should add Kurt Vonnegut to the list. Nothing is new under the sun! The only thing to do is to try to find joy in your daily toil. I’ve never had a job I’ve liked. Even when I’m doing my dream job (art), I’m restless and frustrated, battling “what’s the point?” Victor Frankl redeems all of this in Man’s Search For Meaning, so I take my dose of logotherapy to diffuse the demons.

There are social expectations around productivity, yes. Optimized growth, efficiency, information overload, identifying oneself with one’s work, blurred lines between leisure and work, overabundance of the new, and accelerated communication are all in opposition to meditation, and existing for “no reason.”

The act of making something that may not have any “value” or that isn’t money-driven is a subversive act in a place where art or culture isn’t valued as highly as money or a “real” job. Does that make sense? Having to explain, “what you’re going to do with that art degree” puts artists in that position of having to defend “unconventional” work.

ED: Much of your work, Chronic included, references the notion of the uncanny – or the idea that something is at once familiar yet also deeply unsettling. What draws you to this concept, and how you engage with it in your work?

CT: I love things that are uncanny and unsettling because they say so much about social norms as well about what we collectively fear and value as sacred. The uncanny makes things strange and hopefully shakes us out of our collective apathy to awaken to something new – hopefully to something politically engaging.

Making strange, defamiliarization, or ostranenie are similar concepts. In this present hyper-politically correct time, it’s like we’re craving someone who will tell us the truth about birth, death, sex, etc.

It’s also just finding pure fun and delight in what frightens us, and in what delights us, like children’s toys or anything that moves.

ED: From the north side of project space, the viewer’s focus is mostly on the movement of the trees; there’s a certain whimsy to the trees that’s redolent of fairy tales or stop-motion animation. From the west interior side, the mechanism controlling the trees’ ascent and descent is clearly visible. There’s an interesting tension between these two perspectives. Is this tension intentional? Could you speak a bit about how you hope viewers might encounter the work?

CT: Any time I see the underpinnings of work, I think of the theatre Bertold Brecht created to expose the façade. It makes sense to me not to hide the mechanics. It feels honest. I like seeing pipes and exposed brick and the inner workings of gears in clockwork. I think in this case, the strong, upright behaviour is respected in a system that values individualism and could be seen as a metaphor for keeping it all together, but the reality is that the whole is made up of a series of parts, and so the façade of “having it all together” is really just an illusion.

If you’re rushing by, you won’t necessarily notice that the trees are moving, especially if you happen to catch it at the moment it pauses. Maybe that’s another metaphor for slowing down and observing, as you might be rewarded if you do.

The irony of the movement is that it is directed or dictated, although they do fall into an entirely different formation every time. The control is regulated from the single cable each section must adhere to – they are tethered to their marching orders.

I hope viewers are caught by surprise and experience delight. But also hope the work communicates a deeper sense of fragility, futility, and humour in the absurd.

ED: Chronic’s collapsing tree trunks raise a lot of questions surrounding shifting landscapes and our joint implication in environmental changes. Could you speak to your thoughts on our relationship with the environment and to how Chronic engages with these issues?

CT: I participated in a group walk organized by Leanne Elias in conjunction with Musagetes Foundation where retired biologist Lorne Fitch toured us through the headwaters of the Old Man River near Castle Mountain in southern Alberta. We saw firsthand the devastation of clear-cut logging in an extremely sensitive area at the source of our drinking water! Knowing now that the trees take a painfully long time to grow in this challenging climate made it all the worse. And it was all for pulp product, not lumber. It’s depressing to know our government allows companies to irresponsibly destroy the landscape, and even rewards them for pathetic surface efforts of “sustainability” and does NOT block off the land to further erosion caused by all-terrain vehicles. It felt frustrating and disempowering. We were invited to make work reflecting on this experience and I’ve always been deeply concerned with the environment, and even more so since the current federal government’s blatant destruction.

And yet, Chronic is more about the dishes than the forest (kind of?). I’m not optimistic, but the natural world has a way of subverting my pessimism, which I appreciate. This isn’t necessarily about renewal and regeneration, but maybe it is. I should write a letter.