“Garments, not clothes. Their intention is not to cover or hide, but to make manifest the riches of the body, its treasure of signifiers. Like actors’ costumes, they are a visual speech, a confided secret or a confession of desires and fears. These fine outfits do not veil. They exalt. They celebrate. They translate feelings into jewels. They are the glorious soul of the body. Not a covering, but a sudden appearance, an epiphanic outpouring. A revelation.” — Hélène Cixous, Those Are Pearls … From Jeffrey Gibson: The Anthropophagic Effect exhibition text.

Time Carriers conjures a vision of many hands providing a framework of support, a fluid utopia where trust and movement go hand in hand. It evokes a time frame that both unites and collapses present, past, and future into an undulating and responsive single unit, something that could best be described as community or family. This idea is especially appropriate when considering Jeffrey Gibson’s work, as he has always pushed to create kinship among unlikely partners. Collaboration is at the heart of his practice; working and learning with artists and craftspeople as a way to resist acculturation, support a strong legacy of making, and to build and honour community.

Gibson’s focus on creating garments in the last few years is a logical progression from previous work, drawing on the bodily-ness of his ongoing punching bags series and the cloak-like qualities of his wall hangings. Each garment starts from a single pattern, cut to be oversized on the artist’s body. In researching traditional Indigenous makers who were creating things for themselves and their communities for use, not as art, Gibson observed the incredible power and respect these garments commanded. He decided he wanted to “dress” his work with his own cultural legacy, and further complicate his definition of the art object by insisting his work be wearable. After seeing too many lifeless garments in museum display cases, decontextualized from their cultures and the individuals who wore them, it became crucial to Gibson to also activate his garment works through performance.

Originally commissioned as a performance by the National Portrait Gallery, Washington, in 2019, and then presented in New York at the New Museum, this is the first time that To Name An Other will be seen as both a performance and an installation. The 50 garments and accompanying drums are printed with a “name” that describes an action or event that Gibson has found inspiring and courageous in defiance of circumstances he views as wrong. Avoiding terms such as “cultural resistance,” “colonialism,” or “patriarchy” for fear they will become flattened, Gibson prefers to describe the specifics of a circumstance, defining them as either right or wrong. Things are wrong when someone is silenced, erased, denied their civil rights, treated inhumanely, or because privilege and power are given rules that are different or inequitable. He states, “Although I feel confident that I know what is right and wrong, I also know that life is a constant negotiation and that negotiating is more and more difficult the more engaged you become.” Although the performance of To Name An Other occurs for just under an hour, its residual echo continues to make space for a diversity of voices to have powerful and continued agency in the public sphere; the garments activated in the performance remain, and have been forever altered by the abilities, responses, and histories of living bodies and loud voices.

The garments and photographs from The Anthropophagic Effect series were created for an exhibition and residency at the New Museum in 2019, in which Gibson was invited to produce new work around the theme of inheritance. Gibson continually looks for opportunities to learn new skills and handicraft techniques, choosing for this project to focus on Southeastern river cane basket weaving, Algonquian birch bark biting, and porcupine quillwork, decorative techniques used by Indigenous makers long before European contact. The title of the series alludes to Oswald de Andrade’s legendary 1928 Anthropophagic Manifesto, which argued that Indigenous communities could devour colonizers’ culture as a way of rejecting domination and radically transforming Western culture to their own ends. Gibson speaks of the history of Indigenous craft and design as being “used to signify identity, tell stories, describe place, and mark cultural specificity,” explaining, “I engage materials and techniques as strategies to describe a contemporary narrative that addresses the past in order to place oneself in the present and to begin new potential trajectories for the future.”

Gibson salvages his practice to continually recover, re-claim, and reconsider the scraps of past work for new projects. Drawing from an ever-growing file of designs and photographs of models wearing his work, these images are altered, cropped, and printed onto fabric. It is a reciprocal process; new work pulls from this inventory of recycled imagery while offcuts of the newest projects become seeds for future work. Quilts, by design, are made from the fabric scraps of life. Gibson, like many, recognizes quilts as legacy projects: portraits of individuals, families, or communities, and keepers of generational knowledge and histories passed down from one maker to another, from one owner to the next. This series of quilts are a collaboration with the quilter Robert Bemis whose machine-based free form drawing style adds a wild pattern of stitches upon Gibson’s energetic textile collages. These quilts are about Gibson’s personal narrative; they give love to topics he thinks are important, and honour communities that have supported him. Like all of Gibson’s work, these quilts stitch delicate struggles to rare victories, piece together a future free of colonized and cultural restraints, and connect the most radical, and colourful fabric of his life to an equally vibrant yet complex past.

Performance
Jeffrey Gibson: To Name An Other

In a special performance as part of Jeffrey Gibson’s exhibition Time Carriers, fifty performers will be brought together for a drumming event to give names to our current political climate.

The performance is presented in partnership with Springboard Performance, as part of the 2019 Fluid Festival, and Esker Foundation. 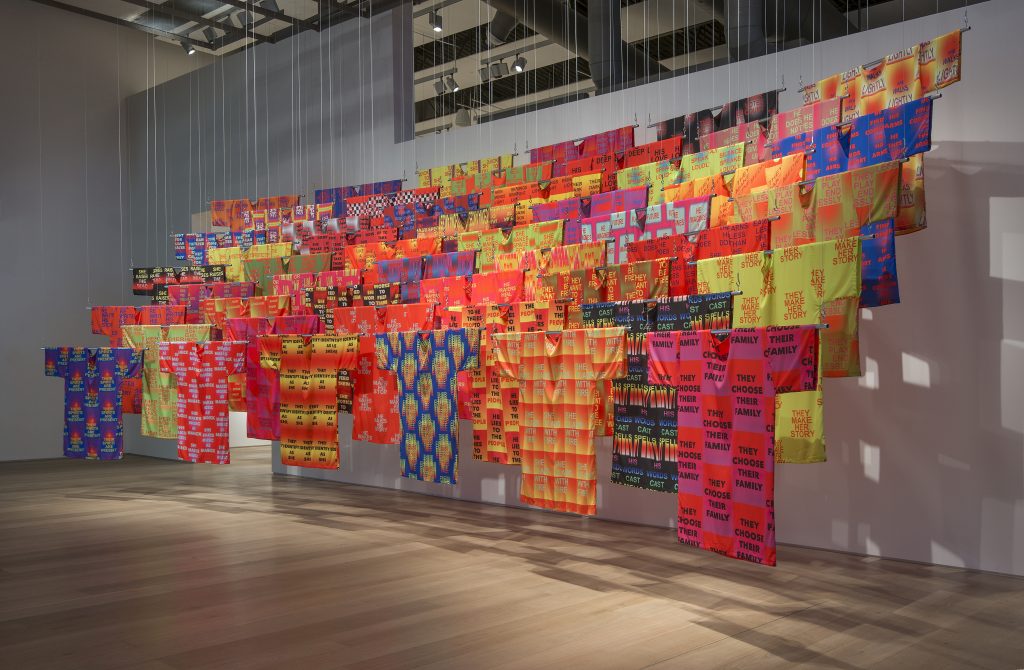 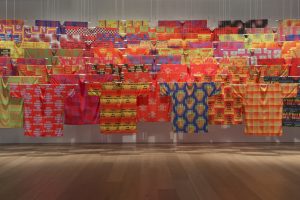 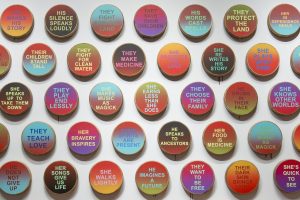 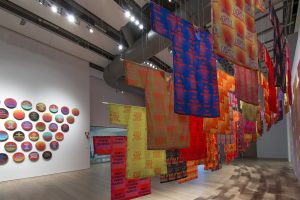 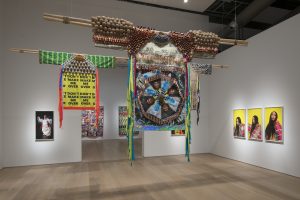 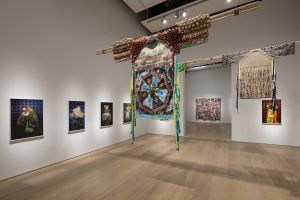 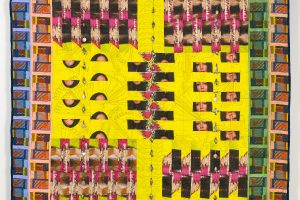 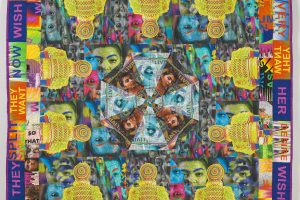 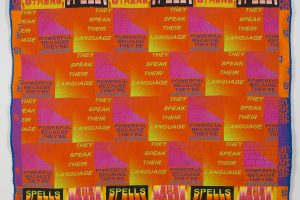 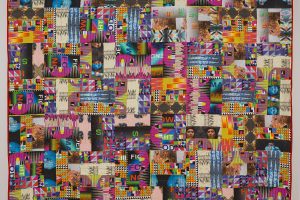 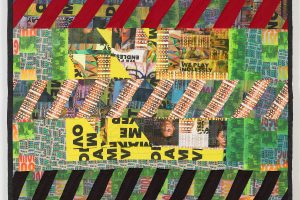 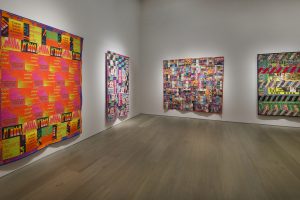 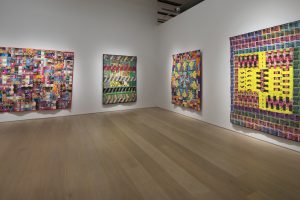 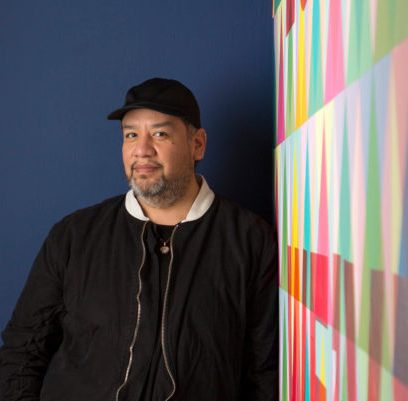 Jeffrey Gibson is an interdisciplinary artist based in Hudson, NY. His artworks make reference to various aesthetic and material histories rooted in Indigenous cultures of the Americas, and in modern and contemporary subcultures. Gibson currently has two solo museum exhibitions traveling; LIKE A HAMMER, organized by the Denver Art Museum, and This Is The Day, organized by The Wellin Museum. Other notable solo exhibitions include The Anthropophagic Effect (2019), The New Museum, New York; Look How Far We’ve Come! (2017), Haggerty Museum of Art, Milwaukee; Jeffrey Gibson: Speak to Me (2017), Oklahoma Contemporary Arts Center; and A Kind of Confession (2016), Savannah College of Art and Design Museum. Select group exhibitions include The Whitney Biennial (2019), Whitney Museum of American Art, New York; Aftereffect (2019), Museum of Contemporary Art, Denver; Suffering from Realness (2019), Massachusetts Museum of Contemporary Art, North Adams; Re:Define (2019), Heard Museum, Phoenix; and Art for a New Understanding:Native Voices, 1950s to Now (2018), Crystal Bridges, Bentonville. Gibson is a member of the faculty at Bard College.