Much of Tyler Los-Jones’ practice is concerned with the way in which we frame nature and insist upon a detachment between it and ourselves: the anthropocentric assumption that we are distinct from it and not intrinsically linked to it, neither physically nor temporally. That nature is Othered to us and exists for our use, enjoyment, and consumption has long been inherent in the vernacular of landscape photography, and this type of mediated representation of the natural persists to this day largely unchanged.

The way air hides the sky suggests a meditative proposition for reframing or dismantling these invisible divisions, complicit hallucinations, and the uneasy relationship between humanity and the natural world. The installation borrows the language and materials of industrial and interior design as a vehicle for the natural image—light boxes, room dividers, rolls of wallpaper, and mirrors: tools for image-making—and deploys them within the conceit of a perpetually in-progress storefront. Situated in a space of commerce and high traffic, the sense of something in process—or, noticed eventually over time, in a mode of permanent stasis—gives us pause, for a moment, to become productively stuck.

Our expectation of the fictitious display window, with its conflation of sultry, slick, sexy, high-gloss theatricality and the serpentine infiltration of the provisional and the natural, operates—in the timbre of a whisper—as a permeable barrier that suggests that which we are already aware: the open secret that we exist not outside of, but within, an oscillating space between the real and the imagined, the interior and the exterior, the natural and the constructed, the opaque and the transparent. 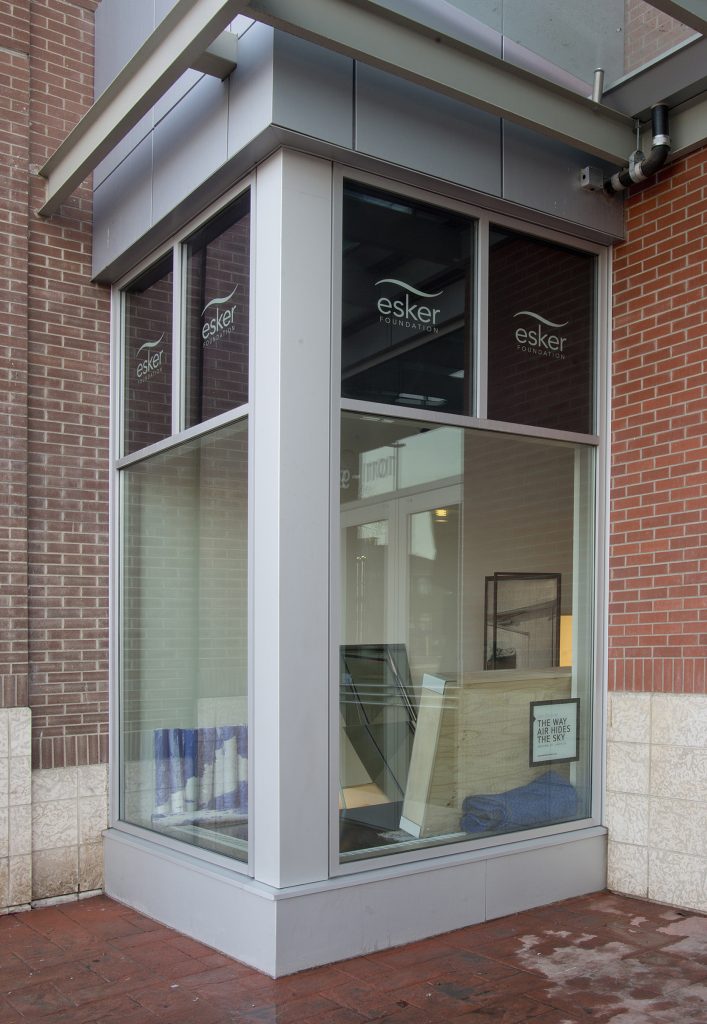 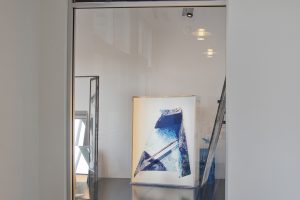 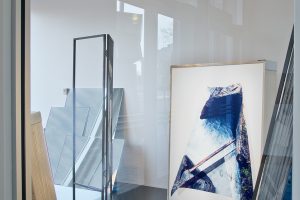 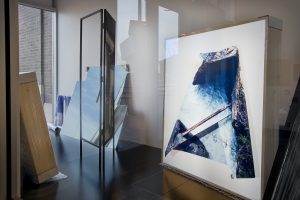 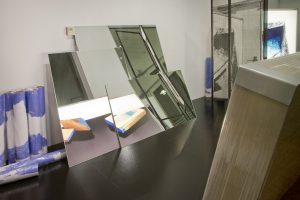 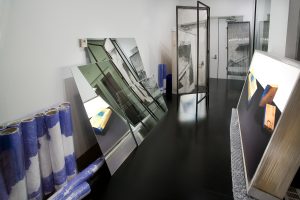 Each moment
Of utterance is the true one; likewise none are true.
Only is the bounding from air to air, a serpentine
Gesture which hides the truth behind a congruent
Message, the way air hides the sky.

Shauna Thompson: The Project Space is something of a strange liminal space; it’s located in the often-busy intersection of a building’s entranceway/vestibule and a high-traffic street (both pedestrian and vehicular) that is loaded with commercial storefronts. It’s a space that, on one hand, is highly visible, while on the other, can perhaps be easily overlooked, especially by people who walk or drive by as part of their daily routine. What was your thinking around staging your work—and I use the word staging deliberately—in this particular location? I’m thinking about this in two ways: first, in terms of your use of, or reference to, particular materials or material language; and second, in terms of time and duration.

Tyler Los-Jones: Staging interests me because it implies the double life of objects. Something staged is both a real thing (actor) and a proposition of another thing (character). This simultaneity of the real and imagined is something I’ve been exploring in my recent work and is deeply connected to how I’ve come to understand western conception of Nature.

Theorists have shown how the concept of Nature is a human construct and that this construction may actually be responsible for our current ecological crisis. I’m most interested in how we negotiate the fiction of Nature with the real effects that our belief in this fiction has brought upon the world.

In the work here at Esker, I wanted to connect this paradoxical concept of Nature with the way viewers might experience the piece. The installation takes the form of a storefront display in the process of being installed and is frozen in this unfinished state. I thought the audience for this work would be people who live in the area and commute past the window space each day. I was hoping that pedestrians would initially be curious about the space and be interested to see how these objects would eventually be displayed. This initial curiosity would probably turn to confusion, annoyance, or frustration when the piece still isn’t installed after two weeks, or two months.

My hope was that after enough time had passed, a viewer’s response would flip from annoyed confusion back to curiosity, and hopefully result in a more intentional experience of the work. At this point, the formal links between the objects in the space make it clear that what appeared to be overlooked is indeed intentional. This relationship between the viewer and the work, where frustration and confusion shift to curiosity and awareness of deeper connectivity, is exactly the kind of shift I wish to see in a broader human relationship to our world.

ST: Indeed, for a number of years your work has had a sustained interest in and concern with humanity’s relationship to the world, the Anthropocene, our impact on other species, our sense of time, and modes of seeing. Could you talk a little bit about some of your thoughts regarding our relationship to the so-called natural world? How do you conceive of your work, particularly with reference to photography, in relation to these concerns?

TLJ: Growing up in Alberta has really framed my interest in the ways that we humans think about our relationships to the world we are a part of. As a resident of Alberta, I am afforded many privileges from the wealth generated by the oil industry, and consider myself personally invested in the polarizing discourse surrounding the environment in popular media. Aesthetic production is a useful tool for me to address questions regarding my own relationship to local ecology and the role of human activity in the changes to our environment.

Aesthetics plays an important role in the construction and maintenance of our assumptions about Nature. Just look at the depictions of the Rocky Mountains used by the tourism industry. National Parks are depicted as pure and pristine even though there are millions of humans traveling through those ecosystems every year. As tourists in these environments we are encouraged to make our own images of them as well. Photography sets the expectations for what nature should look like and is also a tool for fulfilling those expectations.

ST: There is a strange tension here in which some elements of the installation appear very deliberate and polished, like the glossy black floor and these beautifully constructed light boxes, while other moments are seemingly very provisional, such as the inclusion of a pair of seemingly-discarded neoprene gloves. I’m curious about the extent to which you planned these small moments. What is the relationship between planning and happenstance?

TLJ: I’m suspicious of the assumption that more labour in the studio equals more content in the work. I’m always trying to be better at recognizing and respecting connections that are being made outside of my intention. The work becomes a negotiation between how much you can let happen without getting in your own way.

The blue colour of the gloves became a symbol for connection as the work was coming together. Moments in the piece which seem initially accidental all share this same colour, and this cohesiveness complicates their reading as random or unplanned. I was really excited that this blue colour, which was originally unintentional, could take on the role of signifying intentionality in the work.

ST: Everyone is curious about the title of this installation, The way air hides the sky; it’s a poetically evocative one, not to mention a little bewildering. Where did it come from and what does it mean to you?

TLJ: The title of this show is taken from a line in a John Ashbery poem titled “Clepsydra.” A clepsydra is an ancient clock, where water pours out of vessel at a constant rate into a cylinder so the passage of time could be measured. In this poem I feel like Ashbery is doing with language what I wanted to do with images. He has this ability to build and dissolve the poem with the same sentence. I’m in awe of the poems efficiency, where a line like ”the way air hides the sky” is instantly destabilizing. It so easily calls into question our assumptions about boundaries, truth, language, our environment. I was introduced to the poem in the early stages of thinking through this piece and they are related in many ways. I would love to be able to make work as compelling and efficient as Ashbery’s poem.