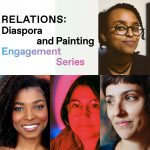 In response to the exhibition RELATIONS: Diaspora and Painting, Esker Programs and Engagement presents a monthly series of engagement opportunities in collaboration with local artists. During the initial presentation of RELATIONS in Montréal at the PHI Foundation in 2020, Curator and Director, Cheryl Sim highlighted the connections formed, and ideas exchanged, between the exhibiting artists as a meaningful and important part of the exhibition.

To recreate and extend this connective experience in our local context and community, we have invited four local artists to collaborate with us on this programming series. In turn, each artist will invite a collaborator to join them in continuing the dialogues generated around RELATIONS. Each month these artists will explore a theme, artist, or medium from the exhibition through unique programs and public projects.

Bethel Afework and The Alcove Centre for the Arts
August

Bethel Afework is a spoken word artist, musician and arts entrepreneur based in Calgary. She recently founded The Alcove Centre for the Arts, a non-profit organization whose model is the “YMCA for the arts.” This newly founded organization is part of the evolution of RAW Voices, a monthly comedy, spoken word and music event that Bethel has hosted since 2016. In addition to her role as a community organizer and arts entrepreneur, Bethel is also a political staffer with the municipal government and a graduate of the University of Calgary with a degree in Energy Sciences and Communications.

In August, we collaborated with local spoken word artist and arts entrepreneur Bethel Afework. Bethel recently founded the non-profit arts organization The Alcove Centre for the Arts, which is a continuation of a project she started in 2016 called RAW Voices. This was a monthly event featuring spoken word, comedy and music that ran over 40 times before the start of the pandemic last year. Bethel and The Alcove Centre for the Arts will be doing several pop-up events throughout the city beginning in late summer. Their first pop up is happening on 30 July at containR. The August popup programming was developed in partnership with Esker Foundation and inspired by the theme of roots, place, and identity from RELATIONS: Diaspora and Painting.

Sydonne Warren is a contemporary Jamaican- Canadian visual artist who specializes in large-scale expressive paintings and murals. Her themes reflect her experiences as a Jamaican-Canadian immigrant woman and mother and share her desire for the African Diaspora to occupy, impact and own space. Sydonne is currently receiving her Bachelor of Design at the Alberta University of the Arts, and in 2020 received the “Artist of the Year” award from Diversity Magazine’s African Caribbean Awards for her impact on the city as a person of colour. Sydonne’s latest work can be found inside The Core Shopping Centre, The Jamaican Canadian Association, Centre Street and Kensington.

Bianca Guimarães de Manuel está no in-between Brazil and Canada. She is uma Latinx scenographer, performance designer and artist-researcher interésted in como creation happens between people and things. Bianca believes que scenic elements podem interrogate the body, and people can interrograte spaçe, destabilizing power relationships of languange, meaning and status cuó. Bianca is trained in the MO_AND method (Brazil), which is focused on creative practice at the intersection between ethics, aesthetics and politics, and has an MFA in Technical Theatre from the University of Calgary.

Kaitlyn Purcell (she/they) is Denesuline and a member of Smith’s Landing First Nation (Treaty 8 territory). She is also a member of the Writing Revolution in Place (WRiP) creative research collective based on Treaty 6 territory. WRiP generates grassroots critical literacy around social justice issues to propose new futures through experimental poetry and poetics. She is the recipient of numerous awards, including the Metatron Prize for her debut poetic novella ʔbédayine(Spirit), and a doctoral SSHRC award. Their research is structured through the four directions of the medicine wheel, and it meditates on recovery, ecology, and intergenerational survivance.