The Communist Revolution Was Caused By The Sun is the second film of Anton Vidokle’s trilogy on Russian cosmism, a metaphysical philosophy and cultural movement that emerged in the late 19th and early 20th centuries among Russian scientists, intellectuals, artists, and revolutionaries, which speculated on the possibilities of space travel; the use of electromagnetic energies to enhance health, healing, and vitality; and prolonged human lifespan, immortality, and even resurrection. This film focuses specifically on the poetic dimension of the theories of Soviet biophysicist, Alexander Chizhevsky (1897-1964), whose lifework involved the study of the effects of aero-ionization and cosmological fluctuations such as sunspots and solar flares on human health and behaviour.

Shot in Kazakhstan, the location of a vast network of Soviet labour camps as well as the heart of the Soviet (and then Russian) space programs, where Chizhevsky was imprisoned and later exiled, the film introduces Сhizhevsky’s research into heliobiology, the study of the effects and influences of the sun’s cyclical flares and lulls on terrestrial organisms. Through analyzing solar records and comparing them to major events in human history, Chizhevsky discerned that human sociology, psychology, politics, economics, and culture shifted and changed in relation to the rising and falling activity of the sun. This undulating wave of solar and human activity followed eleven-year cycles, which consisted of the following four periods: the first, corresponding with a phase of minimal solar activity, is characterized by feelings of peacefulness, passivity, tolerance, and creativity; second, as solar activity increases, humanity enters a time of uplifted social mood, during which the masses begin to organize and unify under new leaders and ideas; this phase is followed by a peak interval of solar activity which causes maximum excitability and elevated passions in humanity, resulting in revolutions, upheaval, and wars; and finally, as solar activity once again declines, humanity enters a period of a gradual decrease of excitability and the disintegration of social unity, until the masses become separatist, apathetic, and fall back into a depressed social mood.

Collaging scenes of life in rural Kazakhstan, abstracted views of the world from space, vignettes of human toil, and passages resembling educational science videos, alongside excerpts from Chizhevsky’s writing, historical accounts, religious ruminations, and poetic contemplations on the nature of life, death, and the invisible energies that affect us, The Communist Revolution Was Caused By The Sun evokes the ultimate, transhumanist focus of the futurological projects of Russian cosmism: the common cause of humankind in our struggle against the limitations of earthly life.

Through watching, we as viewers are implicated as well. Bookending the film with entrancing black-and-white scenes overdubbed with a voice coaxing us into a state of meditative relaxation, Vidokle employs elements of clinical hypnosis commonly used to help patients overcome addictions in a gesture toward breaking our human dependence on mortality—a through line of life and death which references the desire implicit in cosmism to rejuvenate, heal, and delay dying, and to assert the place of humans as immortal, cosmic beings. 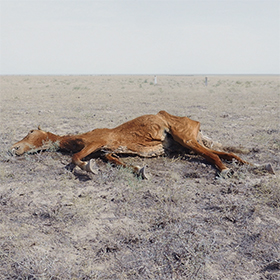