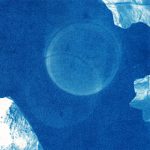 During this day-long workshop participants will make photographic prints using sunlight. Small objects and negative transparencies will be used in exposures on light sensitive cyanotype paper. The resulting images will be compositions in shades of Prussian blue. Participants must be over the age of 16 to participate. All materials will be provided.