Dandy Lines is an exhibition of cosmic country embroidery that references Western fashion through the cyclical, transformative theories of craftwork and animation. It revisits the histories of the decorative and brings to the surface tensions between labour and identity, the body and the psyche.

Richly ornamented cloaks simultaneously project and imbed images of nature and the unnatural: their void interiors await a body for transformation; their heads have been severed, freeing the imagination into the frontier. Embroidered images are pulled from animation sequences that reference nature, but a nature that unnaturally exists between the animate and the inanimate. The cloaks sit atop wooden sculptures modeled after Western animal-objects: the barrel bull, the rocking horse, and the chuck wagon. The human body has replaced the animal and simultaneously acts as both the driver and the rider. The sculptures become extensions of the body; their repetitive motions mimic the looping animation sequences of embroidery. Decoration and surface adornment also act as an extension of the boundaries of the body: designs and symbols project outward and reflect an interior identity. By combining the Romantic era dandy of nature and individualism with the New Romantic notion of the unnatural, Western identity is here presented as a mythic space of continual transformation. 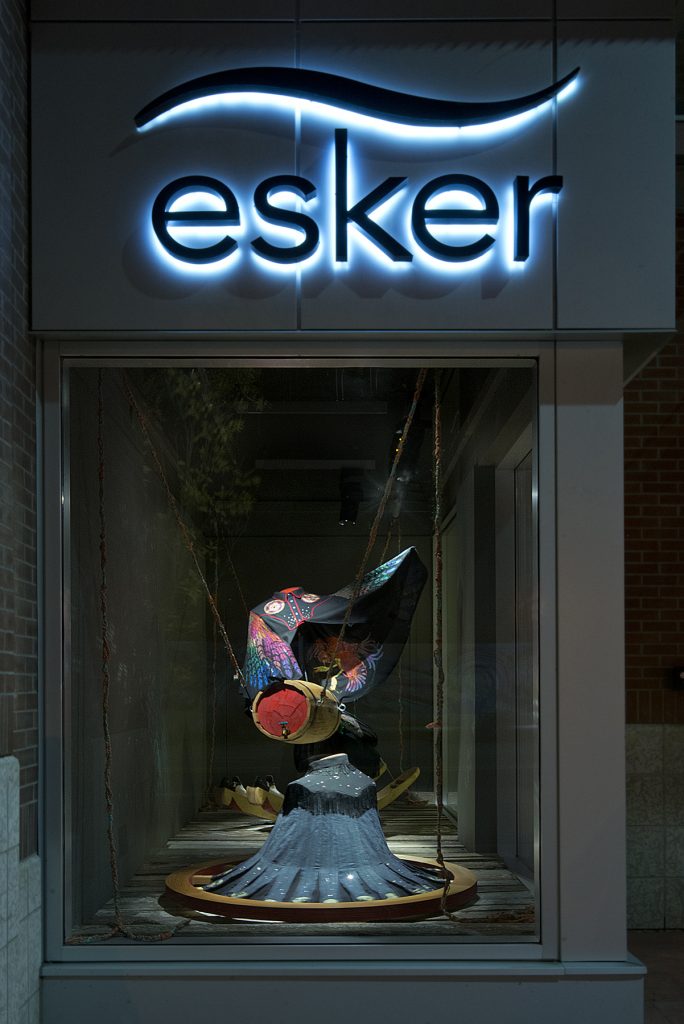 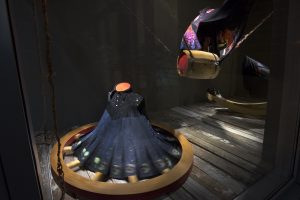 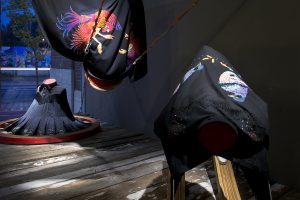 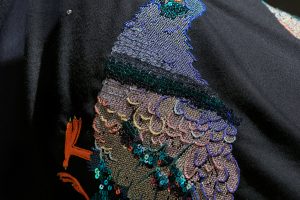 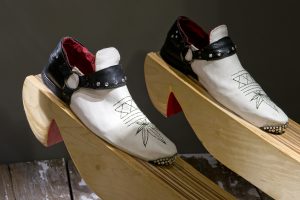 Caitlin Thompson grew up in rural east-central Alberta and completed her BFA in Sculpture at the Alberta College of Art + Design, Calgary (2007). In 2009, Thompson moved to Montreal to pursue an MFA in Fibres and Material Practices from Concordia University (2015). She has recently moved back to Alberta to complete the beneficial cycle of journeying and returning. Her studio practice focuses on the relationship between the act of making and the formation of identity, specifically in embroidery and animation.

Thompson has participated in artist residencies at The National Film Board, Montreal; Est-Nord-Est, St. Jean-Port-Joli; Struts Gallery, Sackville; and the Calgary Allied Arts Foundation. Her work has been exhibited at La Centrale, Montreal; Truck Gallery, Calgary; dc3 Art Projects, Edmonton; and the Museo Textil de Oaxaca. She has received grants from the Canada Council for the Arts, the Alberta Foundation for the Arts, and the Conseil des arts et des lettres du Québec. Thompson will be presenting her first academic paper on the history of country western fashion in the summer of 2016 at the University of Alberta’s Dressing Global Bodies conference.