Bringing together film, sculpture, performance, collage, and installation into complex and multilayered projects, the core of Jasmina Cibic’s practice addresses how visual language, art, architecture, and political rhetoric are deployed and instrumentalised by political regimes as soft power strategies in the enterprise of nation building. Cibic’s works often gather and re-stage found materials (architectural or design elements, fragments of speeches, or archival documents) that are in some way infused by the spectre of political ideology but that have, over time and through the course of history, changed in their performative function as enforcers of State identity.

A major gesamtkunstwerk in Cibic’s practice is the Spielraum series. Throughout the course of three filmic chapters, she examines an approach to nation building through the strategic use of decoration – both within language as well as in architecture – by political figures and establishments. Each chapter of Spielraum addresses a stage in the life of an imagined, ideologically charged building or monument, from its genesis in The Nation Loves It, to its use and life in Give Expression to Common Desires, to its death in Tear Down and Rebuild.

At the centre of this exhibition is the eponymous final chapter, Tear Down and Rebuild. Shot within the extraordinary high Modernist interior of the former Palace of the Federation in Belgrade, the film features a passionate debate among four female protagonists – the Nation Builder, the Pragmatist, the Conservationist, and the Artist/Architect – with each taking a position on the merits or disadvantages of the demolition of an unnamed building. Spoken in convincing, often declarative, sentences, the entirety of the film’s dialogue is comprised of quotations pulled from speeches by public figures, politicians, and architects from the last century, such as Ronald Reagan, Prince Charles, Margaret Thatcher, and Benito Mussolini. These edicts on iconoclasm or preservation question the use and continued relevance of art and architecture made in a particular historical moment with the purpose of establishing, revising, or destroying ideological State narratives.

Outside of the screening room, scenographic elements from the Spielraum films spill into physical space of the gallery: gilded black and white wallpaper; black, modular benches; a grey geometric wall pattern; and three large iron rings adorned with the aphoristic phrases: “Do not tamper with high standards,” “Draw back the curtain of the future,” and “Solve tasks in the spirit of our needs.” Through this arrangement of objects, the exhibition space is staged as an expanded film or theatrical set, which gestures toward the latent performative potential of the static props.

The wallpaper, (Show the Land In Which a Wide Space For National Progress Is Ensured), is a composite of black and white photographs that have been sourced from the archives of Josip Broz Tito’s (the late President for life of the former Socialist Federal Republic of Yugoslavia [SFRY]) personal photographers. These images of sublime landscapes, which were made at the behest of the SFRY, document the locations where Tito held his meetings with world leaders. Cibic displays them as an amalgamated singular landscape and embellishes them with unfurling banners upon which quotations from various political speeches on nation building were gilded during a performance staged during the opening of the exhibition.

Adjacent to the papered wall are four collaged photographs from Cibic’s Nada series, which also reference a historical performance. Part of another large three-chapter project, these photographs (Nada: Act II) are costume studies for a recreation of the pantomime ballet performance of Béla Bartók’s Magnificent Mandarin, which was originally chosen as the cultural work to represent Yugoslavia at the 1958 Brussels World’s Fair, a significant political decision, as this was the first major international Expo to follow WWII. This suite of images depicts dancers wearing refabricated costumes from the ballet while arranged in poses drawn from classic allegorical representations of the female figure as a personification of the Nation State.

Though drawing heavily from the past by mining archives, notable architectural sites, and classic allegorical references, Cibic’s work draws a critical throughline across history to the contemporary moment and offers a cautionary look at the ways in which State interests can be motivated to manipulate and utilize art, architecture, and rhetoric as nationalistic spectacle in the interest of conceiving and maintaining ideological control over State narratives. 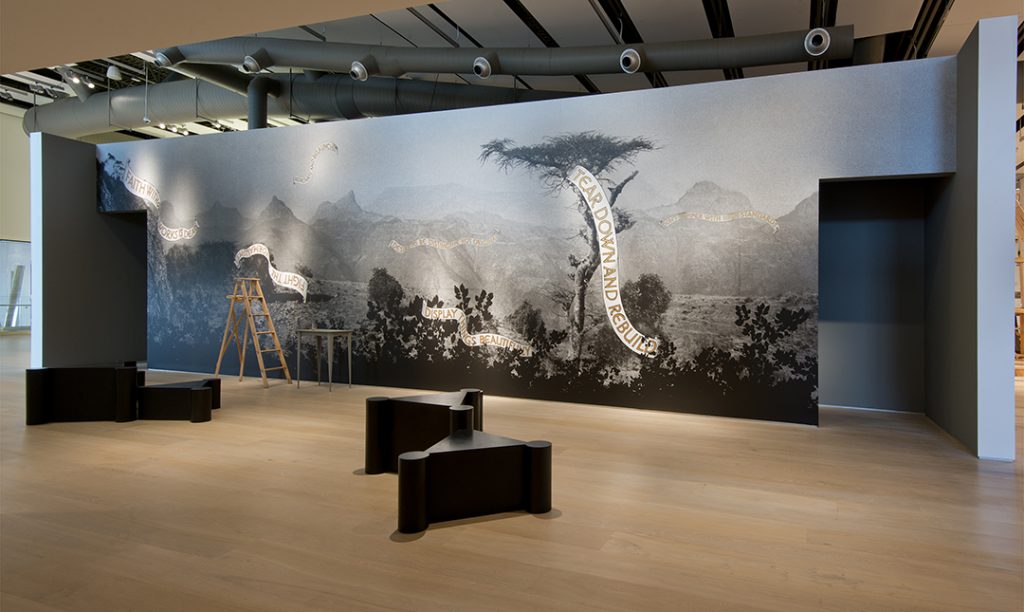 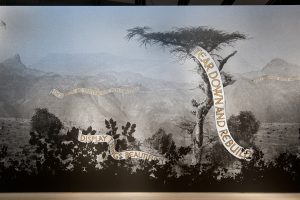 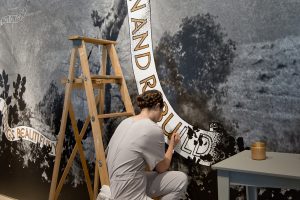 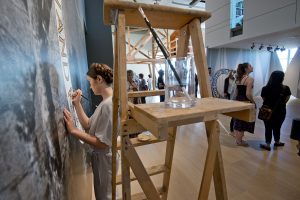 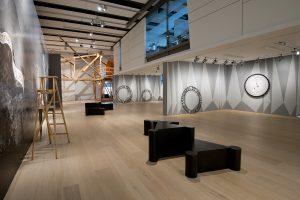 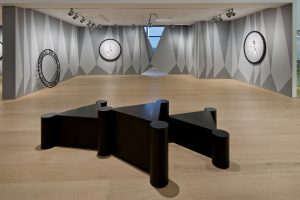 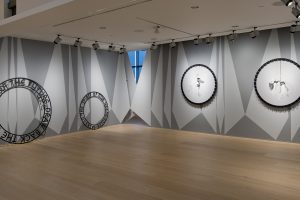 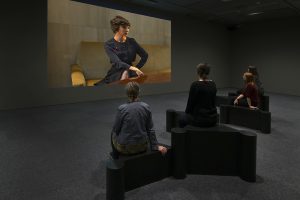 Born in Ljubljana, Slovenia, Jasmina Cibic graduated from the Accademia di Belle Arti in Venice in 2003 and completed her MA in Fine Art at Goldsmiths College in London in 2006. Working between London and Ljubljana, Cibic’s work is site- and context- specific, performative in nature, and employs a range of activity, media, and theatrical tactics to redefine or reconsider an existent environment and its politics. Recent solo exhibitions include Building Desire (2015), Museum of Contemporary Art, Vojvodina; Tear Down and Rebuild (2015), Museum of Contemporary Art, Belgrade; Spielraum (2015), MGLC – International Centre of Graphic Arts, Ljubljana; and The Nation Loves It (2015), Ludwig Museum, Budapest. In 2013, Cibic represented Slovenia at the 55th Venice Biennale with her project For Our Economy and Culture.