Margaux Williamson has said that painting can be a place to consider what is real and what has value. Such consideration leads her to make images unconstrained by the dictates of a preconceived composition and instead she builds progressively with details that stay in the mind. In her studio—an unobtrusive garage behind her house on a downtown Toronto side street—she yields to the slow process demanded by large oil paintings, constructing images that, like thoughts, unfold organically. The interiors that have become a dominant theme in her recent work are both literal spaces, somewhere comfortably familiar, and places of imaginative interiority where her inanimate subjects are brought under the spell of her anarchic treatment of space.

An assortment of food and objects left overnight on the kitchen table (such as in At night I painted in the kitchen [2013]), or the light catching the rim of a glass, a box of discarded papers in the corner, or the glow of a laptop screen, all are given equal value and can seem to exist autonomously. The expanses of undifferentiated space she often leaves around these points of focus are an invitation to look more closely; the banal realities of these compositions are presented as worthy of exploration and are liberated from conventional hierarchies. There is a frankness to her work that enlivens her canvases as ﬁelds of inquiry and a spaciousness that gives us licence to rove around details that become anchors in a ﬁeld of possibilities.

An uncanny temporal element also inhabits the spaces Williamson creates. Objects are seen in fading light or emerging from darkness in dense strokes of paint that describe the intangibility of a moment. She makes her paintings with a ﬂuidity that presents multiple and simultaneous relationships, as in collage. For example, in Bathtub (2020) it appears the water has been left running by the person who recently washed a T-shirt that hangs in midair, atonce beside and behind the tiled backsplash of the tub. Veering off to the left is a wall with wooden wainscotting. Are we in another room, or perhaps this is a backyard fence? A painting within the painting hangs here: a watery seascape with a battleship bombardment in progress, a drama from another time and place. Angled ﬂuorescent lighting presses down, condensing the lines of a story that is familiarly domestic yet entirely open to our imagination. For Williamson the brush stroke, the act of putting paint on canvas, anticipates both ﬁguration and abstraction: the depiction of real objects situated in the ﬂuid pictorial space and time unique to her work.

Over the past several years, painting has become her principal occupation, but Williamson also writes proliﬁcally and has made videos and performances. Her community includes writers, artists, and musicians with whom she has collaborated, notably on her 2008 feature-length video, Teenager Hamlet, which captures the existential questioning and curiosity of young urban friends thinking through their experience of the world, and on various cultural initiatives with writer Sheila Heti. Writing has been her constant companion, and though writing and painting offer parallel paths to meaning, for her they are neither interchangeable nor ultimately substitutes for each other. Rather, writing accompanies her image making, offering another place for reﬂection and inspiration.

Williamson’s painting has evolved through long rhythms; her bodies of work are produced over years interspersed with pauses, often for as many years. During interludes when she is not painting, Williamson builds ﬁles the way a writer might, with phrases, lists, and dream fragments written on scraps of paper. To these text sketches, as she calls them, she adds photographs, pictures torn from magazines, illustrations of artworks from various periods, and drawings. These ephemera, as impermanent as thoughts that come and go, await an undetermined future as they accumulate. Indeed, pages with notes appear everywhere in her recent paintings, taped to the wall and stacked on tables, as if to acknowledge another way of understanding and being in the world. A painting may emerge from such collected thoughts as readily as from photographs of light in a room or the items on her tables.

Painting is invention, the opportunity to make visible, to choose or to cast aside. And Williamson’s art carries implicitly within that invention histories of painting, whether in the way her works can recall the decorative surfaces of an Édouard Vuillard interior or the deft brushwork of Delacroix and Manet. Her images of hands resemble the awkwardly outsize mitts painted by Philip Guston, and there is a collision of depth and nearness in her work that echoes Matisse, as do the patterned carpets and fabrics she favours. Williamson’s work resides in the real world of here and now without allegiance to realism, and this, after all, is what painting can achieve: a way of seeing reality anew, a way of considering its simultaneous familiarity and strangeness.

Organized and circulated by: 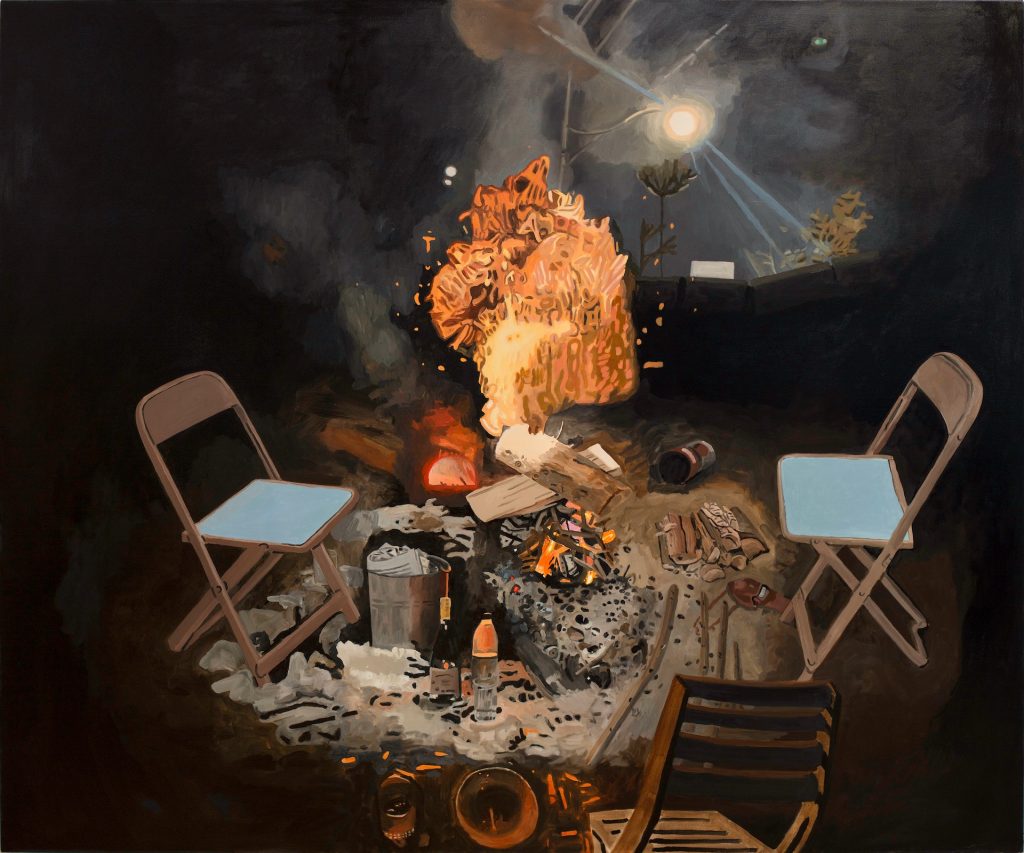 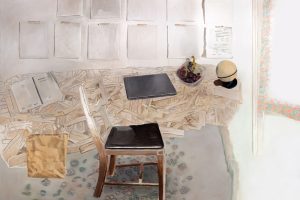 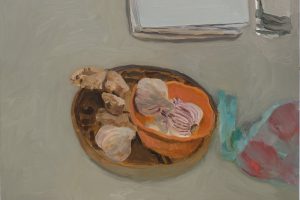 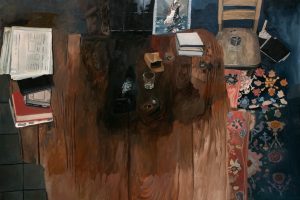 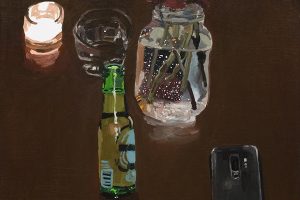 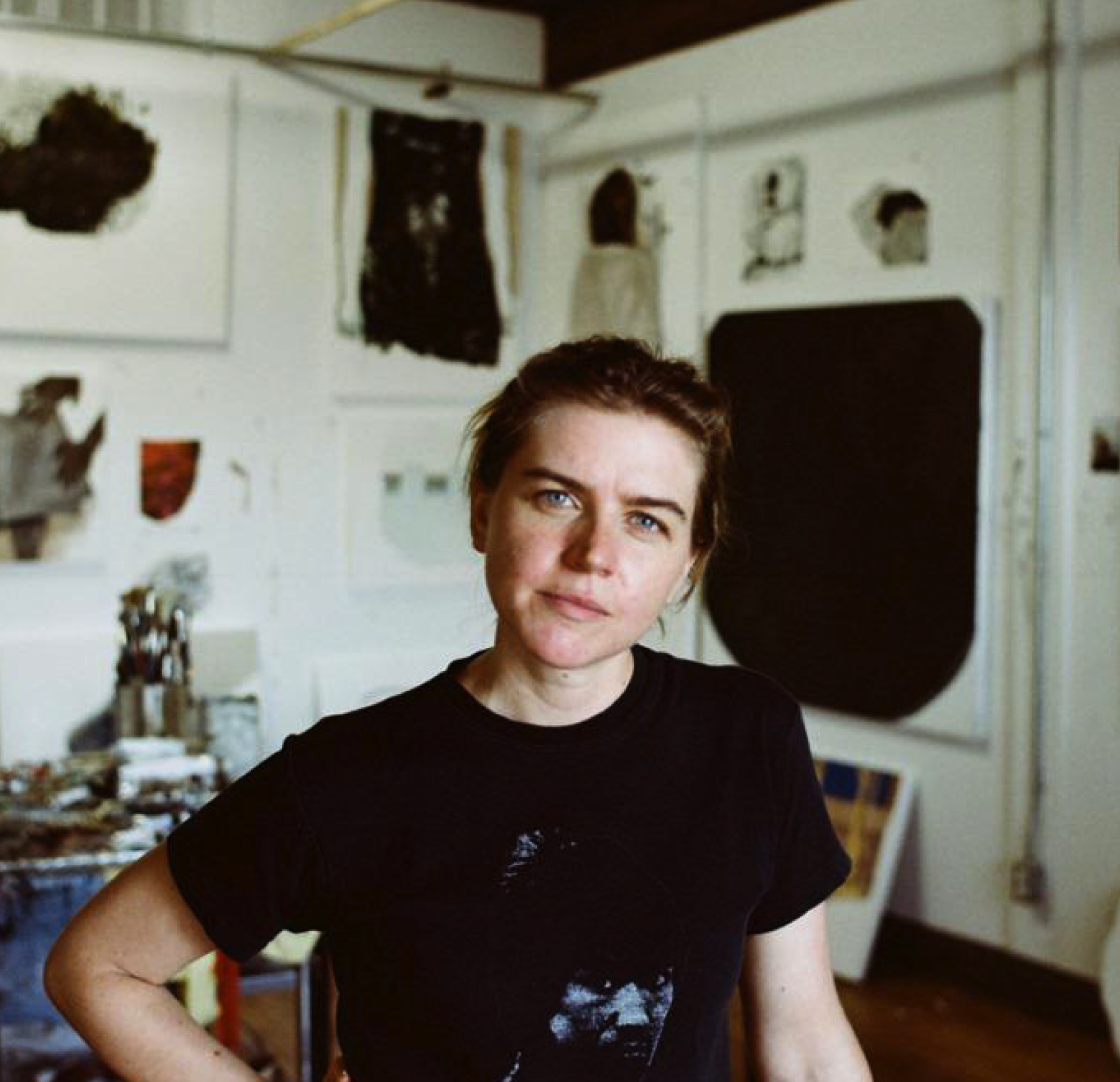 Margaux Williamson was born in Pittsburgh in 1976 and lives in Toronto. Her first book of paintings, I Could See Everything, was published by Coach House Press in 2014, alongside shows at the Mulherin+Pollard Gallery in New York, and Frith Street Gallery in London. In 2021, White Cube, London, mounted an online exhibition of her recent paintings.

Her feature-length film, Teenager Hamlet, premiered at the Toronto International Film Festival and is archived on UbuWeb and she also contributed movie reviews to the cultural site Back to the World. She was artist-in-residence at the Art Gallery of Ontario, Toronto; Klondike Institute of Art & Culture, Dawson City; and MacDowell, Peterborough, New Hampshire. Her work has been covered by New York Magazine, The New York Times, Vogue, BOMB Magazine, The Globe and Mail, The Believer, The Huffington Post, and more.

Williamson completed her Bachelor of Fine Arts degree at Queen’s University, Kingston, and was the recipient of an exchange scholarship to the Glasgow School of Art. Her work has been presented in solo and group exhibitions in Toronto, London, and New York. 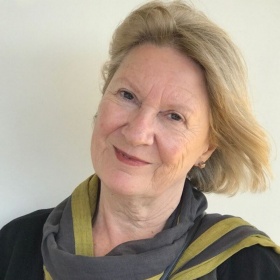 Jessica Bradley, curator of Margaux Williamson: Interiors, is an independent curator based in Montreal. Formerly, she served as Curator of Contemporary Art at the Art Gallery of Ontario, Toronto (1995-2004) and as Associate Curator of Contemporary Art at the National Gallery of Canada, Ottawa (1980-87). She was commissioner for Canada’s representation at the Venice Biennale on three occasions. Bradley has published extensively and organized numerous solo and group exhibitions in Canada and abroad. She founded her own commercial gallery in Toronto (2005-15), where she mounted more than eighty exhibitions featuring a rising generation of artists.