Samuel Roy-Bois’ practice is concerned with the conceptual and material definition of space and the ways the built environment and manufactured things contribute to our understanding of the world. Through sculpture, site-specific installation, and photography, Roy-Bois examines relational networks of objects and their complex philosophical considerations: How do we define ourselves through the creation of structures? Is it possible to conceive of one’s existence outside any material linkage? We make things, but are things also making us?

For this new body of work, Presences, Roy-Bois has created an ensemble of constructed and found objects that consider our contemporary material knowledge. His discrete architectural sculptures act as vessels for everyday things and are separated from the gallery’s architecture by platforms. This series of site-specific improvisational installations present everyday objects in new ways, blur the boundaries between art and life, and shift ordinary things and spaces into a poetic dimension. By connecting sculpture, everyday objects, floor, and ceiling, Roy-Bois manipulates the gallery space as a strategy to create a genuine and direct relationship with the viewer, and his use of everyday items offers a way of understanding our relationship to our environment.

Roy-Bois’ series of photographs present momentary, precariously composed sculptures that exist only long enough to document; these sculptures are only experienced by the viewer through the photographs. His use of sculpture and photography subverts our expectations of both mediums. Rather than existing as separate, disconnected works, they serve to support one another. The sculpture is only there to generate a photograph; the photograph is only there to document the sculptures. The photographic image is in fact prompted by the production of the sculptural work, not the other way around. By intersecting sculpture and photography, Roy-Bois situates meaning between the two mediums. This approach alludes to existential questions underlying his work that interrogate the very existence of things. The frozen moment of a photographic image offers respite in a world of constant transformation and reveals our tenuous relationship with reality.

Rather than seeking out his materials, Roy-Bois uses everyday objects that cross his path, objects that belong to a cohort of things that form the material constellation he lives in; they become sculptures by chance. Each work is in conversation with a context: the object within the context of a sculpture; the sculpture within the context of a photograph; the installation within the context of an architectural space. The platforms are there, in part, to send the viewer back to their own body, to invite proximity while also maintaining distance. They also exist as sites for the sculptures to emerge. For Roy-Bois, “the type of objects found in the photographs and sculptures is important, as their respective identities oscillate between functional and intimate. Many of them make direct reference to the body and suggest intimacy: the ladders and mattress are objects used in close proximity to the body, but can also repulse (a used mattress) or trigger uneasiness (ladder).”

Presences points to the ways in which human experience is inextricably linked to manufactured things and spaces, and how the greater meaning of our existence is mediated through objects. Roy-Bois’ artistic strategies draw on the philosophical inquiries of Graham Harman’s Object Oriented Ontology, which rejects the privileging of human existence over the existence of objects and suggests that artwork reveals itself through an accretion of ideas and sensations that culminate into a complex universe that is both fragmented and coherent, to be absorbed in a way similar to music. Roy-Bois’ work resonates with Harman’s interrogation of the way in which dominant ontologies (a branch of metaphysics dealing with the nature of being) affect our interactions with our surroundings – the environment, social structures, and personal relationships. To make sense of the world we apply a hierarchical system of values to things: what is important and what isn’t, what is meaningful and what isn’t.

Perhaps in an effort to push up against the affirmation of things existing, and of our existence, the body is omnipresent in this work, which creates a tension between what we know, what we see, and what we think we know and see. Roy-Bois states, “there is an inherent resistance in each work comprising Presences. Each work defines itself in performing opposition to a given context, being specific to the objects (ephemeral sculptures) or to the physical context where the work is to be found (objects pinned against the gallery ceiling).” The individually hand-cut pieces of wood that make up each sculpture, the used rags hanging purposefully between uniform squares, and the mattress pressed firmly against the ceiling are a reminder that objects of art do not exist without the presence of the artist, the viewer, or the context in which they are viewed.

Support for the development and production of new works for the exhibition provided by Esker Foundation. 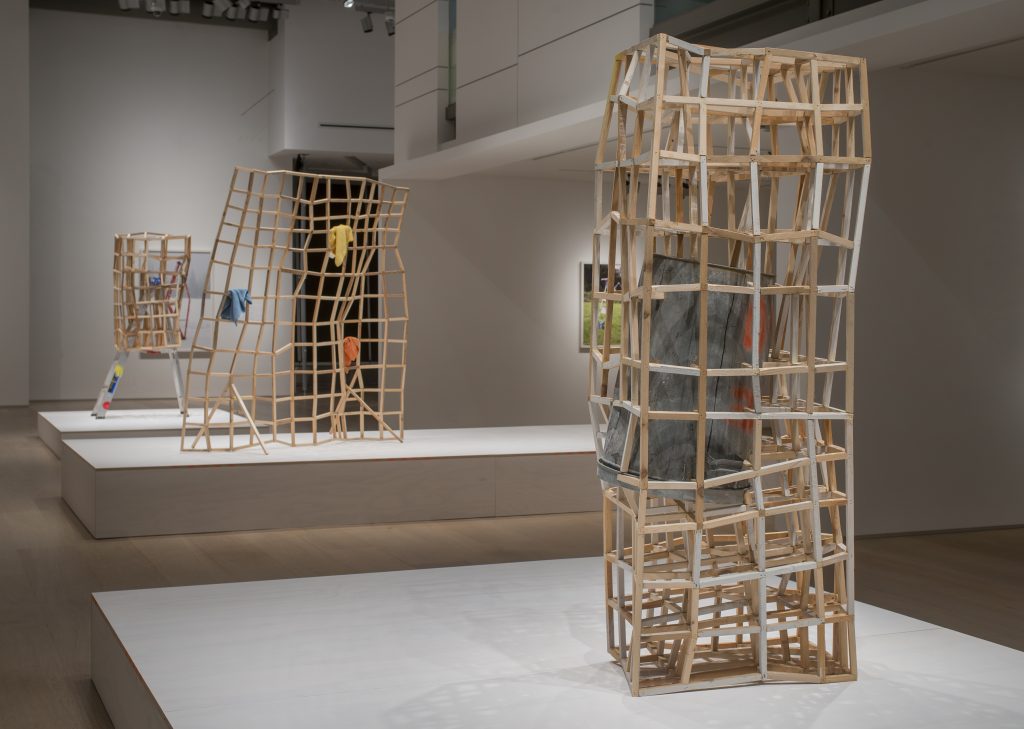 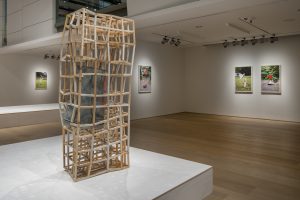 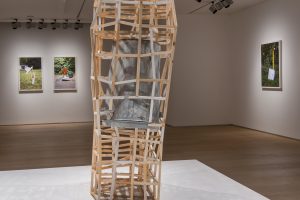 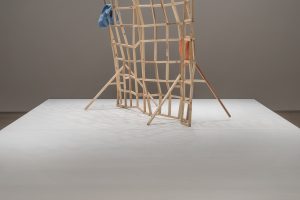 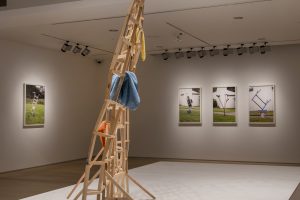 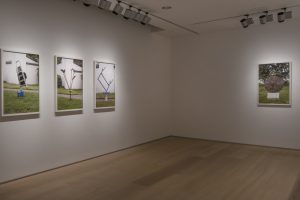 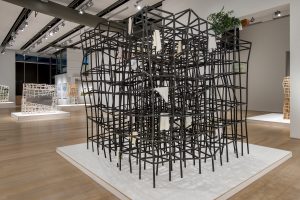 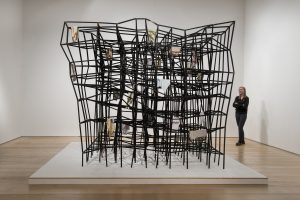 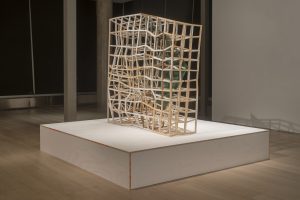 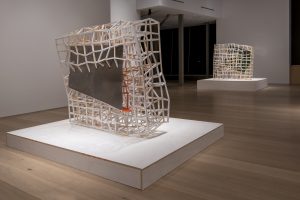 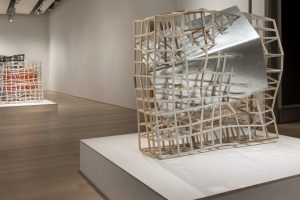 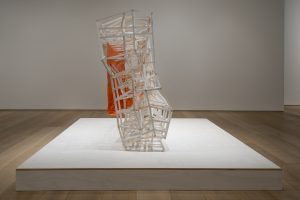 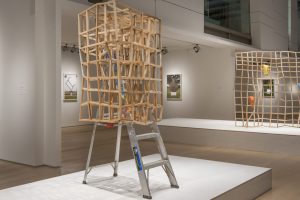 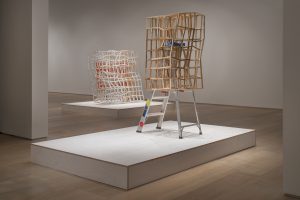 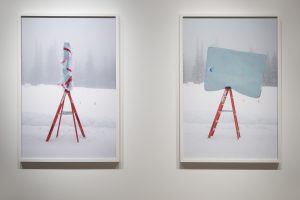 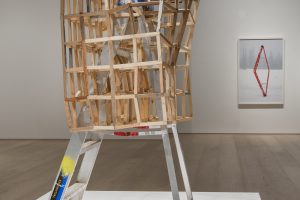 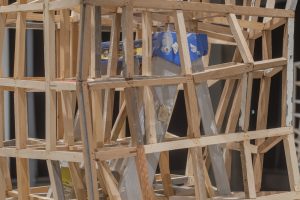 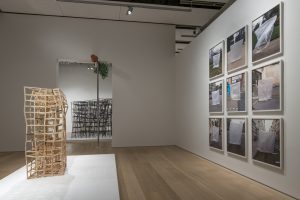 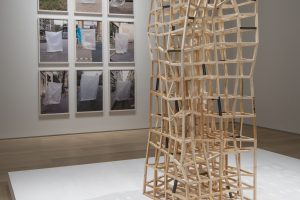 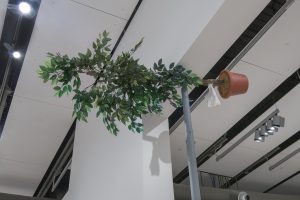 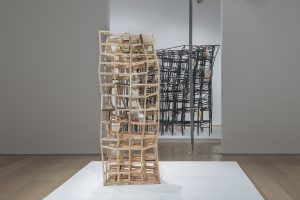 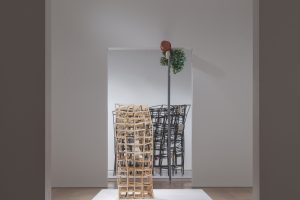