A close study of symmetry and the high level of detail necessary in botanical and technical illustration provides an appropriate starting point for thinking about the sculptures and drawings of Sarah Stevenson. Borrowing from the diagrammatic research models of biologists, naturalists, and physicists, Stevenson’s work appears as sculptural illustrations of natural forms and systems, created to further explore and understand the design and laws of nature. Like drawing in air, wire and string are arranged into bilateral and almost symmetrical forms and are suspended from the ceiling. They suggest the apparent weightlessness of a jellyfish, the minute exoskeleton of a zooplankton organism, or even the universal energy system of Toroidal Dynamics.

Toroidal Dynamics is the name used to describe the area and volume of a torus, a form that consists of a central axis with a vortex at both ends and a surrounding consistent energy field. Energy flows in one end, through the central axis, and out the other end, endlessly cycling in, up, and around the surface of the form. Generally, ‘the donut’ is used to describe this kind of form, but as toroidal energy systems are seen in plants, trees, hurricanes, tornados, planetary and solar magnetic fields—not to mention whole galaxies—the shape is less important than the concept of the energy flow. Most illustrations of this process represent the donut or inner tube shape covered in a gridded pattern that both defines the shape and demonstrates the flow of energy over the shape. Stevenson’s work appears as multiple renderings or models of this dynamic energy flow process.

Starting always with drawing, forms are mapped out on paper in a constellation of lines. The drawing then becomes the pattern or blueprint for the sculpture. The places where verticals and horizontals intersect act as guides to determine the tie points where strings are attached to a series of wire rings. Between each connection, an open weave of wire and thread forms a grid. As the grid builds, the sculpture emerges, defined by variations in length of string and how slack or taut the weave. Generally, these forms are hollow, but occasionally a secondary internal structure is added, making the pathways of geometry and symmetry exponentially more complex. Both single and nested forms generate transformations and alterations in how the space of the gallery is perceived, not the galleries per se, but the actual space between walls; below the ceiling and above the floor.

As the title of the exhibition, Nothing Hidden, suggests, the relationship between the sculptures and the spaces in which they are installed, acts as a constant and shifting dialogue of transparency and containment. The string and wire lines that form the grids define the shape of each sculpture, while also framing everything around them—a reciprocal dialogue between inside and out, background and foreground. When seen through each other, these lines criss-cross into a dense kaleidoscope of negative and positive spaces. The subtle colours of the sculptures, which on first glance appear as illusions or reflections, are tinted or white strings that add a shimmering quality to the contours. Titles are given after the work is finished, during production, or occasionally at the drawing stage. Swallow, Jelly, Husk, Bone, Plumb, Smash, and Split are a few examples of the highly evocative yet illusive titles Stevenson gives her sculptures. In many, a lead weight is used to both tie off the tail of threads, as well as to anchor and still the work.

One of the fascinating aspects of Toroidal Dynamics is the curious phenomenon of the very centre of the entire system, which comes to a point of ultimate balance and stillness. While Stevenson’s sculptures take visual cues from the dynamism of the constant movement of this energy flow process, they are also simply and satisfyingly about perfect stillness. These sculptures and drawings quietly point to the complex dualities of fragility and resistance, transparency and opacity, tranquillity and unrest, while also offering a respite from the frenzied pressure of constant action. 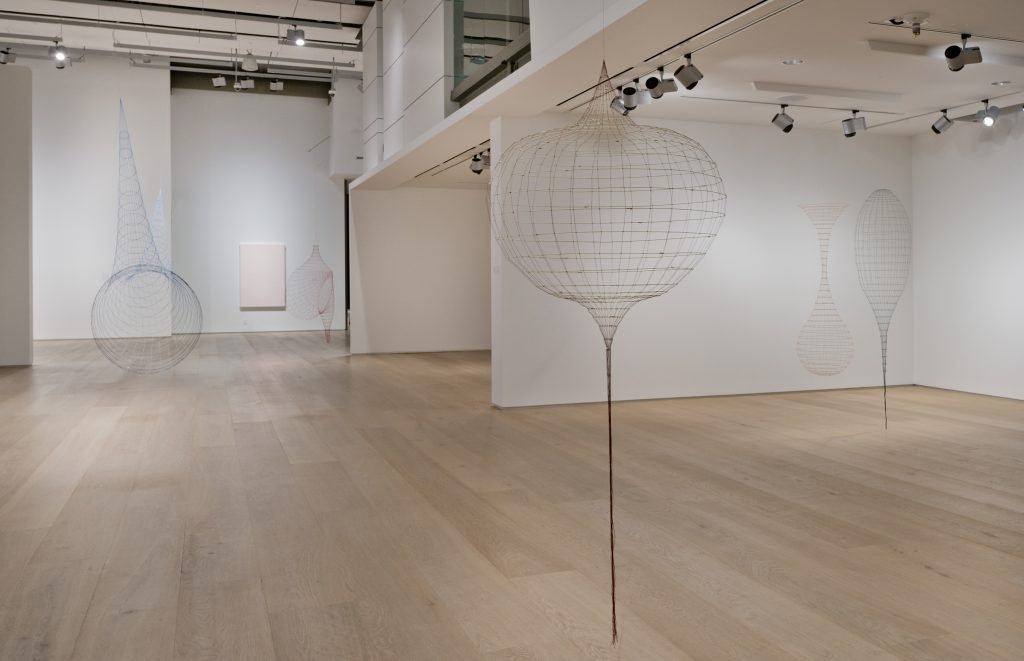 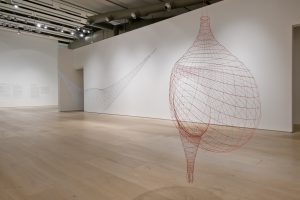 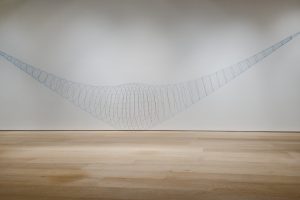 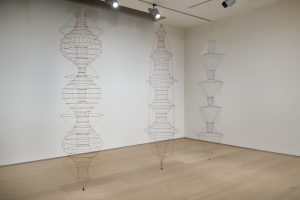 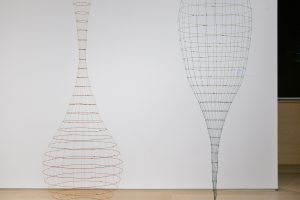 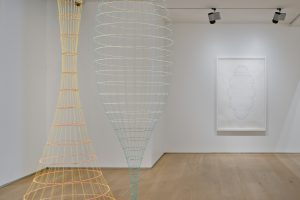 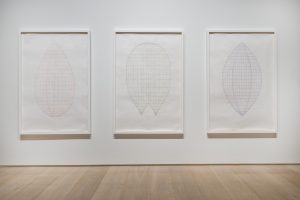 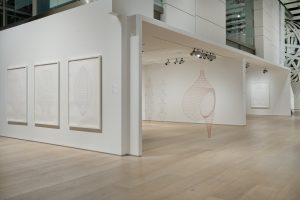 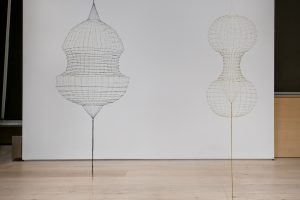 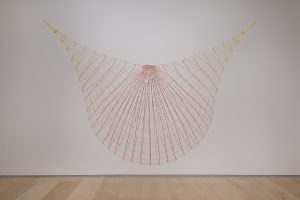 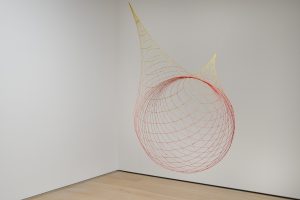 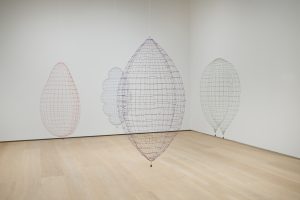 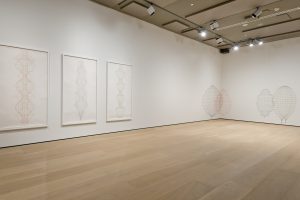 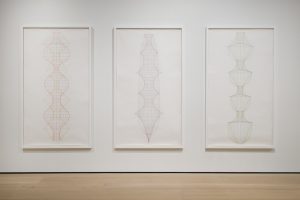 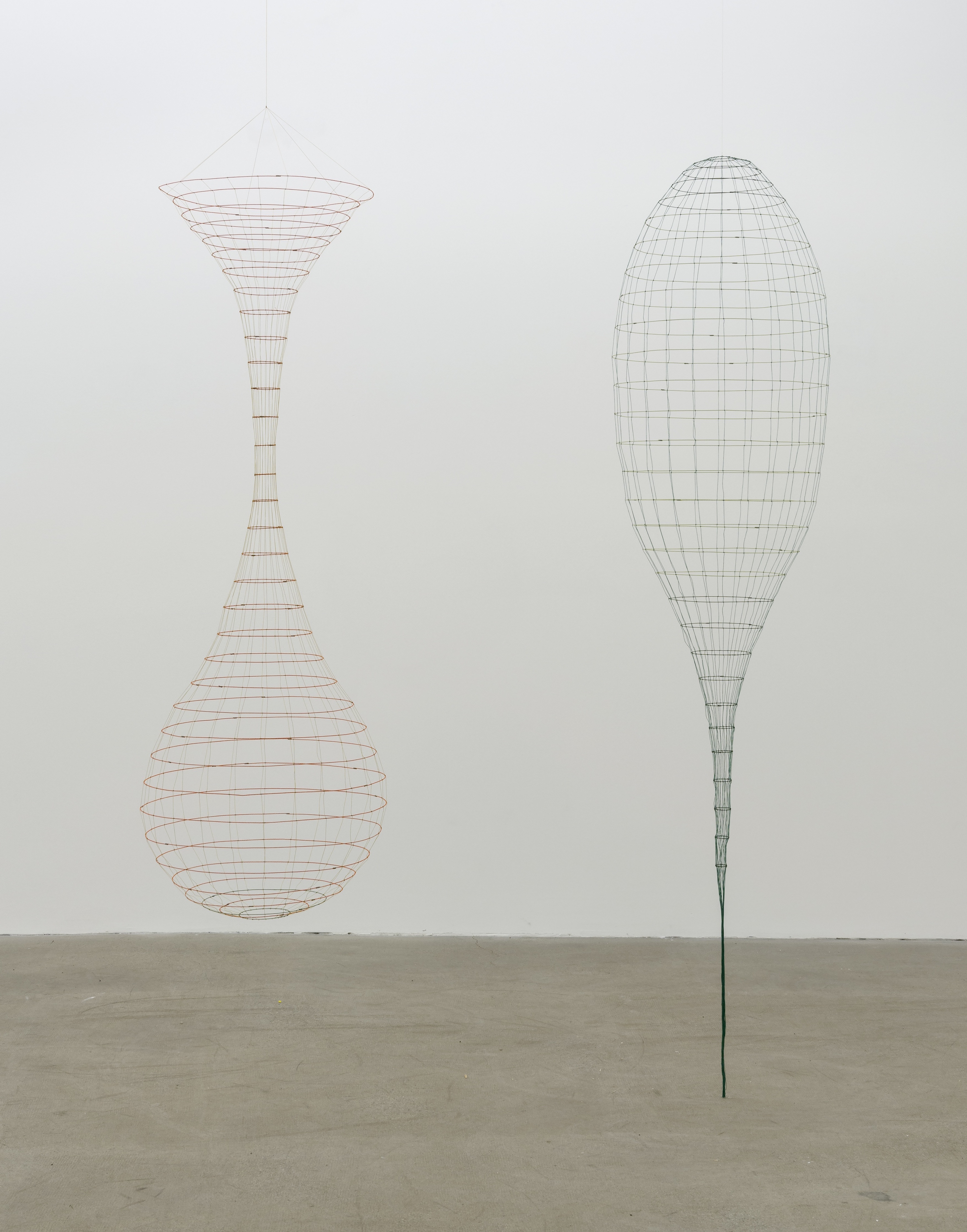 Sarah Stevenson was born in Worthing, England. She grew up in Canada and currently lives and works in Montréal. She received a BFA from the University of Victoria in 1984. She has worked in sculpture for over thirty years, often creating hollow abstract forms using transparent materials. Stevenson’s work has been exhibited at various institutions in Canada, the United States, and South America, including exhibitions at Galerie René Blouin, Montréal (2017); Musée national des beaux-arts du Québec, Québec City (2010); Leo Kamen Gallery, Toronto (2007); Musée d’art contemporain de Montréal (2002); and the Southern Alberta Art Gallery, Lethbridge (1999). Her work is included in public and private collections, including the Canada Council Art Bank, the Crédit Lyonnais Canada, and the Collection Lambert en Avignon. Stevenson is represented in Montréal by Galerie René Blouin. Find out more about Sarah Stevenson’s work at: www.sarahstevensonart.com