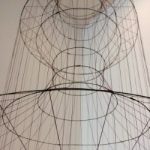 While Tammi Campbell, Agnes Martin, and Sarah Stevenson each create work in different media, their practices are linked through a shared fascination with the grid and its infinite permutations. Elizabeth Diggon, Esker’s assistant curator, presented this informal tour that parsed the conversations occurring between Campbell’s, Martin’s, and Stevenson’s work on the visual language of the grid and its different material expressions.