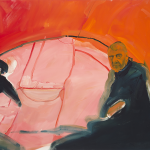 Brenda Draney’s paintings are based on her experiences and the relationships formed between her current hometown of Edmonton and the northern community of Slave Lake, where she was raised. Her paintings are drawn from stories, memories, and family photos, and consider how narratives are constructed and how they, in turn, construct our identities. In this talk Draney told some stories about her family, some things she had heard, and some things she had read. Some of these stories were ones she had told before, others she probably shouldn’t have told, and some of them were not true.