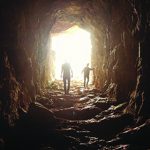 In this talk Jason de Haan, Miruna Dragan, and Pranav Behari shared a number of experiences, overlapping interests, and collaborative works as they related to de Haan’s exhibition Oh for eyes! At night we dream of eyes!

Partners in life and art, Jason de Haan and Miruna Dragan met in 2008 during the Cosmic Ray Research residency at the Banff Centre and have since lived and worked together in Canada, Mexico, Romania, Lebanon, and Greece, producing a number of projects individually and in collaboration.

Pranav Behari is a writer and comedian based in Brooklyn whose work draws from absurdist, macabre, and metaphysical traditions. In 2016, Behari participated in the Corbin Union Residency, along with Dragan and de Haan in the East Kootenay coal-mining ghost town of Corbin, British Columbia. During that period of time de Haan and Behari began the collaboration that would develop into Herein Lie The Sleep Sick, the artist designed publication that accompanies this exhibition.