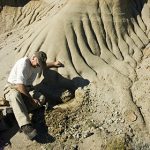 In this talk, Dr. Don Brinkman spoke about the cultural significance of turtles and what makes them so unique among living vertebrates. He presented an overview of the history of turtles, including their origin, major groups, distribution patterns, and their fossil record in Alberta.

Dr. Brinkman is the Director of Preservation & Research at the Royal Tyrrell Museum where he studies how ancient animals, and turtles in particular, lived in their environments during the time of the dinosaurs. Dr. Brinkman’s presentation included information on Shelly, the Royal Tyrrell’s soft-shelled turtle, a member of a group of turtles that has remained unchanged for 100 million years and is featured in Jason de Haan’s A house that tells you where you came from.