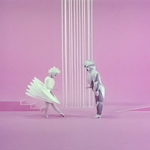 The Triadic Ballet (1970) is a film by Margarete Hasting that is based on an avant-garde ballet originally conceived by Bauhaus-affiliated artist, designer, and choreographer Oskar Schlemmer in 1922. Through costume, scenography, and music, the ballet is concerned with stylization and abstraction of the human form and its movements in space. The film will be screened on an ongoing basis in co-ordination with Beth Stuart’s exhibition Doubting Thomas. This program was generously supported by the Goethe-Institut.