Best known for sculptures made from both found and cast objects, Liz Magor is interested in the cyclical culture of production and consumption, how we assign value to things, the utilitarian and non-utilitarian functions of objects, and our emotional and psychological attachments to them. Her work addresses the latent qualities of ordinary things that influence our acquisition, use, and disposal of them and how, sometimes, the power that these objects hold can even supersede our human relationships.

The singular work One Bedroom Apartment was first presented in 1996 at Susan Hobbs Gallery in Toronto and has since been shown in numerous exhibitions throughout Canada, the United States, and Europe. For each installation, the entire contents of a typical one-bedroom apartment are brought together (furniture, small items, linens, knick-knacks, and packing materials) sourced primarily through a combination of renting and borrowing. Each installation is fundamentally influenced by where it is installed, as different forms and styles of items are obtained and included. The only constant object in each iteration is a simplified resin sculpture of a dog, curled under a table.

This work is, quite simply, an arrangement of real things – mostly wrapped or partially wrapped. The objects are at once familiar and commonplace, yet, placed here in the setting of a gallery, they are also strange and ambivalent. We wonder: Are these things being moved into this space? Out of it? Are they being prepared for storage? While the temptation may be to organize and assess this pile of objects, the work resists performing a definitive narrative. In the absence of the people who own them, One Bedroom Apartment instead draws our attention to the objects themselves – to the things that surround us every day – and our relationship to them.

Though unintentionally timed, the presentation of One Bedroom Apartment in Calgary in 2020 feels particularly resonant. The city is in the throes of reckoning with its identity as a metropolitan centre during a severe economic crisis, while new buildings full of empty one-bedroom apartments and condos are springing up along historic streets, waiting to be occupied by a precarious population.

Additionally, in recent months, we have all been compelled to retreat to our domestic spaces in the interest of public health. Being inside of our homes surrounded by our things has been presented as a space of reassurance and safety, though it is important to note, of course, that not all domestic spaces are in fact reassuring or safe. The form of this installation suggests something of a barricade, with furniture, boxes, and wrapped materials constructing a sort of wall to keep a separation between the inside and the outside. One Bedroom Apartment, like many of Magor’s works, alludes to a connection between our desire to amass things around us and feelings of protection, refuge, and shelter.

At the same time, this apartment is currently un-livable; it presents an ambivalent scene, a static, yet in flux and precarious space. Inside the pile of loosely organized and dismantled things, the small white dog exists, alone, in relation to all that is accumulated around it, its pose anxious and alert. The things with which we surround ourselves bear witness to the changing conditions of our lives, and even stand in as facets of our identities. In states of stability and precarity, they are present and we are required to deal with them. When we choose or are compelled to move, our material environments are thrown into disarray—an uncomfortable, insecure, even painful process.

As we find ourselves dealing with the economic and social impact of our recent collective actions, as well as the effects of global market collapse, the stability of home and the protection offered by our things are called into question. 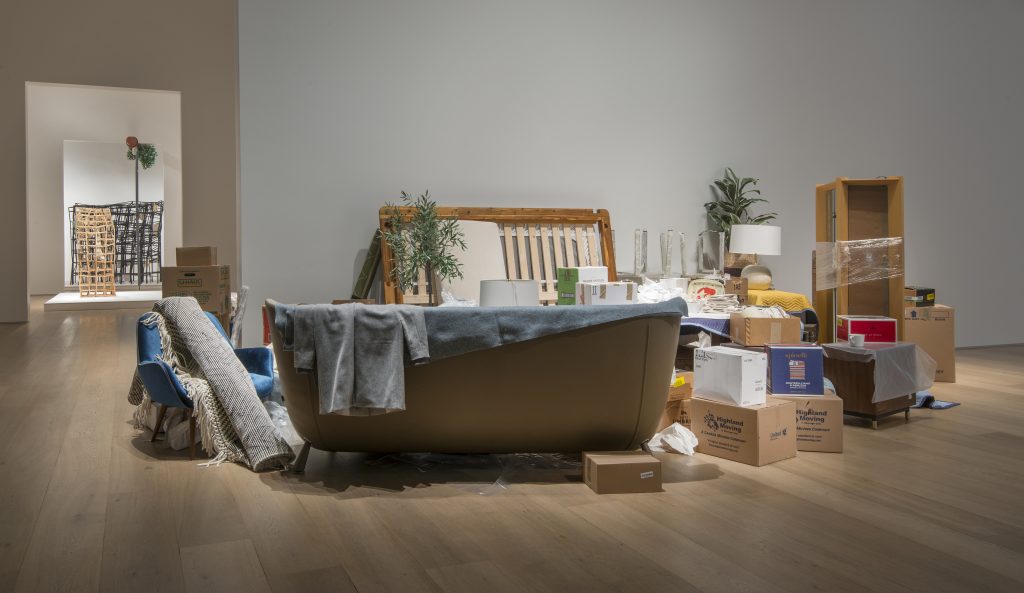 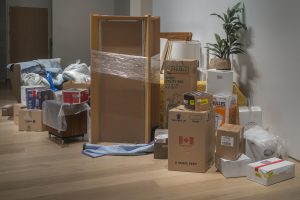 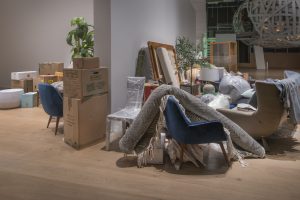 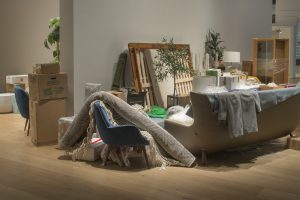 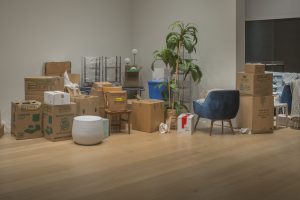 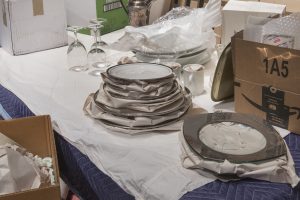 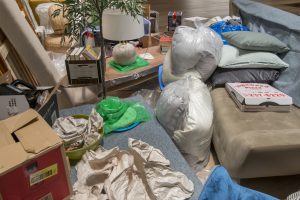 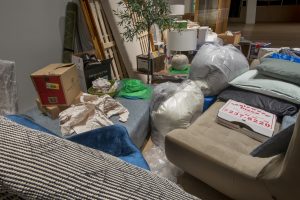 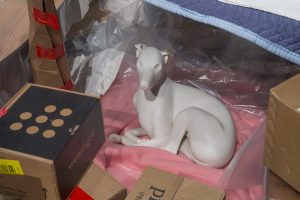 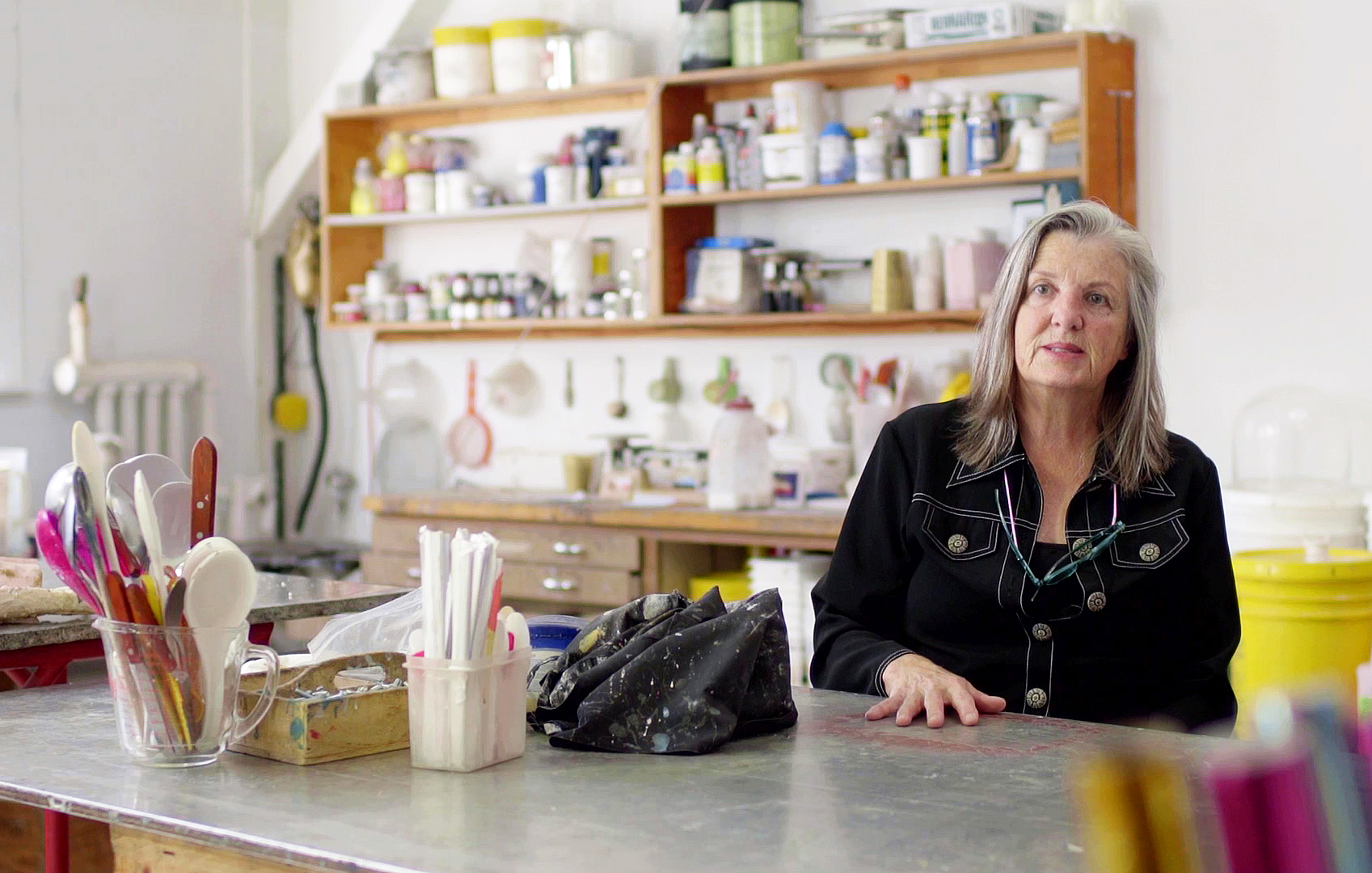 Liz Magor lives and works in Vancouver. In 2017, her work was the subject of traveling survey at the Kunstverein in Hamburg; Migros Museum, Zurich; and MAMAC, Nice. Other recent solo exhibitions of her work include: Centre d’art contemporain d’Ivry – le Crédac, Paris (2016); Musée d’art Contemporain de Montréal (2016); the Art Gallery of Ontario, Toronto (2015); Peep-hole, Milan (2015); Presentation House Gallery, Vancouver (2014); and Triangle France, Marseille (2015). In addition, she has had solo exhibitions at Henry Art Gallery, Seattle (2008); the Power Plant, Toronto (2003); and the Vancouver Art Gallery (2002). Magor is the recipient of the Gershon Iskowitz Prize (2014), the Audain Prize for Lifetime Achievement (2009), and the Governor General’s Award (2001). She represented Canada at the 41st Venice Biennale, and participated in the 4th Biennale of Sydney and dOCUMENTA (8). Magor is represented by Susan Hobbs Gallery, Toronto; Catriona Jeffries, Vancouver; and Marcelle Alix, Paris.